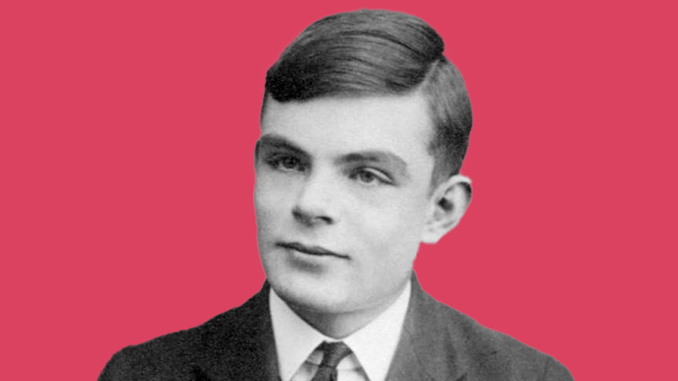 Presented as part of the 2022 Sydney Gay and Lesbian Mardi Gras Festival, New Theatre presents Hugh Whitemore’s Breaking the Code at the New Theatre from 12 February.

During the Second World War, tucked away in the country at Bletchley Park, the most brilliant mathematical minds in Britain were working to crack the complex German military code known as Enigma. One of them was the eccentric genius Alan Turing, who invented a machine that broke the code.

But Enigma wasn’t the only code he broke. At a time when homosexual acts were considered a criminal offence, Turing’s arrest after the war on a charge of gross indecency after admitting to a sexual liaison with a young man he’d recently met, shattered the homophobic social code.

The public humiliation that followed, and his choice to undergo chemical castration rather than serve a prison sentence, left him physically and mentally debilitated. In 1954, he died by his own hand, aged 41, forgotten and alone.

Half a century later, Turing is now lauded as a British hero. After being posthumously pardoned by the Queen, his story was immortalised in the film The Imitation Game starring Benedict Cumberbatch.

The legislation that secured pardons for 75,000 other men and women convicted of similar crimes has become known as ‘the Alan Turing Law’, and in 2021 he became the new face of the £50 note.

This acclaimed biographical drama investigates who he was, what happened to him, and why. It’s a compassionate and poignant depiction of the life of an extraordinary man, his creativity, his yearning for love and companionship, and his deep humanity.

In this, our 90th year, New Theatre is presenting our 27th production as part of the Sydney Gay and Lesbian Mardi Gras: Hugh Whitemore’s Breaking the Code, and we welcome back director Anthony Skuse to bring this beautiful play to our stage.

“The play’s real concern is the way Turing’s openness and refusal to compromise about his homosexuality challenged the social and moral codes of the day,” says Anthony.

“Breaking the Code was first performed in 1986, the same year that the Pet Shop Boys released Love Comes Quickly – you can imagine the song’s refrain of ‘how am I going to get through’ running through Turing’s head as his worlds began to unfurl,” continued Anthony.

“Both the play and the song were responding to similar social forces: the impact of HIV/AIDS and Margaret Thatcher’s conservative government. The Pet Shop Boys along with artists like Derek Jarman, were writing a new narrative for gay men specifically, and the Queer communities at large.”

“Like Alan Turing, they were also navigating a system that denied them space and challenged their existence. Hugh Whitemore’s play reclaimed Alan Turing’s place in history and offered him as a role model if not a national hero in a period of crisis.”