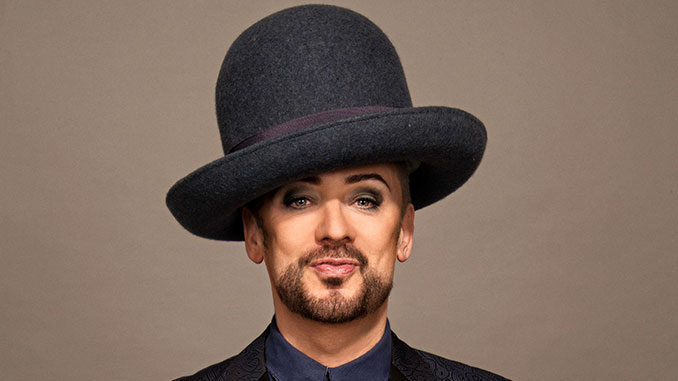 Boy George and TEG Live have joined forces to create FANTABULOSA – a recognition of the LGBTQIA+ community’s powerful impact and contribution to modern popular culture.

FANTABULOSA will be a sparkling, sophisticated and memorable event, headlined and curated by Boy George, featuring reinterpretations and tributes to some of the greatest songs ever written.

FANTABULOSA will deliver a unique experience for Boy George’s fans and celebrate the creative output of an amazing community.

They will be accompanied by an all-star live band with Musical Direction by Andrew Worboys and Show Direction by Cameron Mitchell.

“We all know that the power and the creative influence of the LGBTQIA+ community across music, fashion, film, art and design is unmatched in its breadth and depth,” said Boy George.

“After decades of struggle for acceptance we stand proud and united as we continue to colour and shape music, dance, art, film, design and fashion around the world. FANTABULOSA will be about sophistication, high fashion, beautiful music and celebration, and I can’t wait,” he said.

More than just a live show, expect a new twist on iconic songs such as Billie Holiday’s The Man I Love, David Bowie’s Heroes, George Harrison’s Here Comes The Sun and more, set to the backdrop of a dazzling and high-energy, theatrical display.

A proud celebration of diversity and creativity, FANTABULOSA will provide audiences a window into one of the most creative minds of our generation as they go on a musical journey of unity, love and beauty.

A touch of sophistication, a dash of fabulous, FANTABULOSA will be a night to remember! This cross generational event is being launched in Australia as an exclusive series of Sydney and Melbourne shows commencing on the 11 & 12 March 2022 at Darling Harbour Theatre, ICC Sydney, then moving to Plenary, Melbourne Convention & Exhibition Centre on the 18 & 19 March 2022

$1+ GST from every ticket purchased to FANTABULOSA will be donated to the Mardi Gras Foundation – supporting LGBTQIA+ communities by giving them a voice to celebrate with pride and hope to improve the lives of people who face barriers for simply being themselves.

As one of the oldest, continuously operating LGBTQIA+ organisations in Australia, Mardi Gras was built on the foundations laid by early community activists who fought for LGBTQIA+ rights in a time of wide-spread, institutionalised oppression and discrimination.

Today Mardi Gras continues to be a global leader in the promotion of diversity, inclusion, equity and social justice through culture, creativity and partnerships. For more information, visit: www.mardigras.org.au for details.

When Boy George first appeared on Top of the Pops with Culture Club in 1982, he instantly had people talking. The New Romantic pop sensations went on to achieve seven UK Top 10 singles, nine Top 10 singles in the USA, and nine Top 20 singles in Australia – selling over 100 million singles and 50 million albums worldwide.

Aside from per-forming music, Boy George also wrote the lyrics and co-wrote the music for stage musical Taboo, for which he was nominated for a Tony Award for Best Musical Score. Turning his attention to DJ-ing in 2007, Boy George has performed sets in Australia, Dubai, Germany, the Netherlands, New Zealand, Canada, the UK, France, Brazil, Belgium, and Russia, amongst others.

Boy George reunited with Culture Club in 2016 for a 40-city tour which saw the band play to sold out crowds around the globe and in October 2018, Boy George and Cul-ture Club released their first album in almost 20 years, LIFE.

Note: This tour will be held with a commitment to a COVID Safe environment. TEG LIVE will work closely with and comply with all requirements of the public health authorities in respect of these shows.