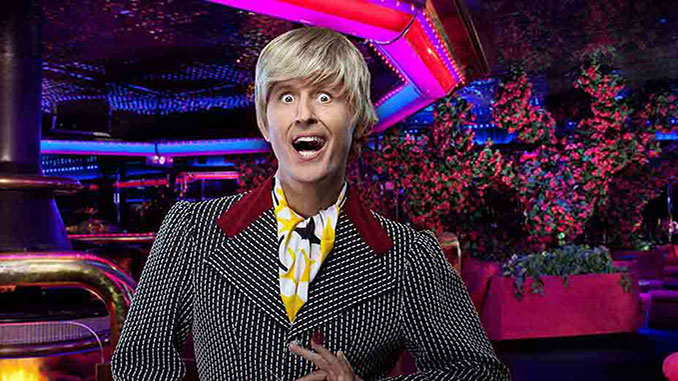 After his sell out success earlier this year, Bob Downe is bringing back his high rolling cabaret Viva Bob Vegas! to the Paddo RSL this November.

In 2021, the celebrated star of cabaret, comedy, television and theatre Bob Downe is all dressed up with no-where to go – but he’s standing by to sparkle his way out of Lock Downe!

Viva Bob Vegas! is one of the funniest nights out in years – and don’t we all need a good laugh right now. Complete with a four piece band, special guest Sydney legend Shauna Jensen, and his burlesque girls Frenchie Darling and Cello Bordello, it’s a naughty Lounge act with crooner classics and wild comedy, led by the Prince of Polyester in his brand new show.

We can’t go to Vegas, so let Vegas come to you! Get on Downe, laugh out  loud and swing along with Bob in a hilarious evening of comedy and cabaret. Viva Bob Vegas! will have you in stitches and reaching for a Highball. As always, Bob Downe promises to put the Pimm’s in your Punch!

“Talk about Covid Interruptus!” says Bob. “We just got going with a tour of Viva Bob Vegas!, with fans and friends telling me it’s the best Bob Downe show ever – and then along comes the lockdowns!”

“But don’t worry, Bob’s keeping his Pimms cool and his routines hot and will be back on the boards as soon as we’re out the other side. There’s a live band waiting, along with special guests and my burlesque dancers. We can’t wait to see you again!” he said.

One of Australia’s most loved and enduring comedy characters, Bob Downe is the creation of journalist, comedian, actor and broadcaster Mark Trevorrow. Mark was born in Melbourne, trained as a journalist at the Herald Sun, and moved to Sydney in 1982 with the huge success of his cabaret group, The Globos. He created Bob Downe in 1984 and has toured the world as the Prince of Polyester ever since.

Bob’s stage shows have played to acclaim at the Edinburgh Fringe, Adelaide Cabaret Festival and the Melbourne International Comedy Festival, with decades of touring across Australia and the UK including P&O Comedy Cruises and performing for the Queen at the Royal Variety Performance.

Bob’s TV appearances range from Countdown to The Project, from the Mike Walsh Show to Studio 10, and hosting multiple Sydney Mardi Gras broadcasts. As Mark he has been heard regularly on ABC local radio and presented The Way We Were – a ratings winner on ABC TV in 2004. He is also featured regularly on Kath & Kim as ‘Darryl’ the menswear salesman.

Viva Bob Vegas! will also be presented in Darwin, Gosford, Gold Coast, Melbourne and Brisbane in early 2022. For more information, including dates and venues, visit: www.bobdowne.com for details.