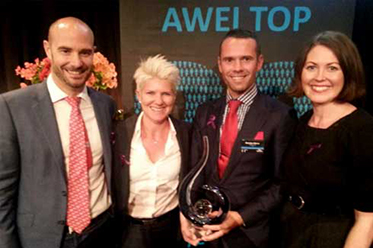 Goldman Sachs has been named Australia’s Employer of the Year for 2014 at a special event recognising workplace support for lesbian, gay, bisexual, transgender and intersex (LGBTI) people.

The Australian arm of the global financial services firm topped a list of 20 organisations which were recognised today at a special luncheon in Sydney organised by Pride in Diversity, Australia’s first and only national employer support program for the inclusion of LGBTI people in the workplace.

Pride in Diversity Director Dawn Hough says more organisations are engaging with AWEI. “This is the fourth year of the AWEI. The number of employers participating has increased by 83% from Year 1 and we now have over 5650 employees participating in the employee survey.”

“The focus on LGBTI inclusion initiatives has increased substantially.  Organisations outside of the Top 20 are completing submissions showing a depth of work comparable to Top 10 organisations a couple of year ago.  Australian employers are taking their work in this area very seriously.”

“LGBTI inclusion within Australian workplaces is on the rise and is fast becoming a differentiator in the workplace diversity agenda.”

Ms Hough says the luncheon and awards, which every year commemorate International Day against Homophobia and Transphobia, provide a valuable platform for organisations to highlight the quality of their LGBTI workplace diversity practices as well as provide a national benchmark on what organisations are doing in this space.

“Pride in Diversity congratulates all the organisations recognised today on their significant achievement and for showing great leadership in the area of diversity and inclusion,” Ms Hough concluded.

The 2014 Top 20 Australian employers for LGBTI people are:

8. The University of Western Australia

Image: Goldman Sach representatives accept their 2014 Employer of the Year Award at the Pride and Diversity Awards Luncheon 2014 – photo courtesy of ACON