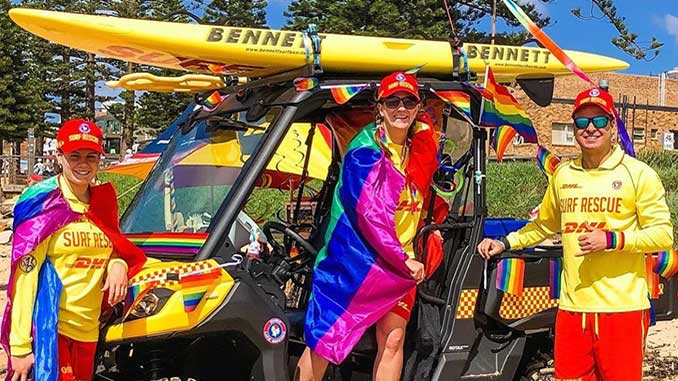 To celebrate pride, diversity and the Mardi Gras season, Lifesavers with Pride (LWP) have teamed up with Surf Life Saving Clubs along the east coast of Australia to bring the spirit of Mardi Gras to our iconic beaches on Sunday 27 February 2022.

As part of the Rainbow Beaches celebration, surf clubs up and down the coast are getting out their rainbow best, with beach patrollers, nippers and swimming clubs adding colour to their equipment and fluro zinc to their sun protection.

Some clubs are also planning additional activities, including “paddle outs” (conditions dependent) and have engaged with local councils and businesses to show their support.

Clubs hosting Rainbow Beaches celebrations include Bronte, Tamarama, Coogee and Bondi in Sydney’s East; Dee Why, Bigola, Avalon and Queenscliff on the Northern Beaches and Byron Bay, Brunswick and Yamba in regional NSW.

Taking place the weekend before the Sydney Gay and Lesbian Mardi Gras Parade, Rainbow Beaches is a grassroots initiative among members of Surf Life Saving that celebrates the strength and diversity of clubs and coastal communities by bringing the spirit of Mardi Gras to the beach.

Ivan Power from LWP, who developed this initiative with LWP Chair Gary Driscoll, said, “Surf Life Saving has evolved to become far more diverse and inclusive since it was formed over 100 years ago to make our beaches safer,” he said.

“The more diverse, inclusive and welcoming we are as a community, the stronger and more effective our movement can be. Surf Life Saving clubs are part of communities right around our country whose culture has changed substantially in recent years, reflecting the communities and members they serve.”

“We are so pleased to be working with Mardi Gras to empower our members and clubs to show the progressive and inclusive nature of our communities and our movement,” said Power.

“Community initiatives like Rainbow Beaches are important because they let the LGBTQIA+ community know that we are welcome, we are accepted and celebrated.”

For over a decade, Lifesavers with Pride (LWP) have marched in the Sydney Gay and Lesbian Mardi Gras Parade to highlight the safe, proud and progressive nature of Surf Life Saving, one of Australia’s oldest and largest community movements.

Just like LWP’s annual parade entries, Rainbow Beaches is another way that Surf Life Saving is demonstrating that clubs are diverse and inclusive, and that everyone is welcome to join our great community.

Rainbow Beaches was first held on some of Sydney’s beaches in 2021 to bring the spirit of Mardi Gras to the beach.

In 2022, surf clubs across the state are participating to highlight the safe, proud and progressive nature of their communities and it is hoped that clubs across Australia will take place in the annual celebrations in the years to come.

Rainbow Beaches will take place on Sunday 27 February 2022 at Sydney’s East: including Bronte, Tamarama, Coogee and Bondi | Northern Beaches: including Dee Why, Bigola, Avalon and Queenscliff | Regional: including Byron Bay, Brunswick and Yamba. For more information, visit: www.lifesaverswithpride.com.au for details.