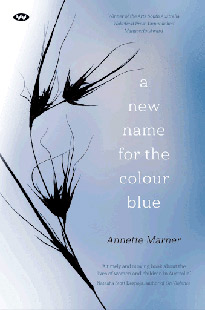 A story of the healing power of remembering, of love, and the breathtaking beauty of the natural world, A New Name for the Colour Blue is a stunning new literary crime novel by the winner of the Adelaide Festival Unpublished Manuscript Award 2018, Annette Marner.

Ten years after the disappearance of her best friend, and the death of her mother, Cassandra Noble escapes her country childhood to pursue life as an artist in the city. On the threshold of a promising career as a painter, her creativity suddenly abandons her.

Soon after, she finds herself with a lover who wishes to control her just as her father once did. While her last painting just might hold the key to why she can no longer create, what will happen when she discovers the two tragic events of her childhood are linked in ways she could never have imagined?

The opening section of the novel reveals how domestic violence can unfold in real life, as opposed to in stereotypes – the way a quick, early flood of intense love can mask a need to overwhelm; the way an abuser insidiously separates a victim from their support network; the role of shame in stopping an abused woman from leaving; and the complexities of leaving once your self-esteem has been eroded, and your physical safety is at risk.

Marner says her identification with women affected by male violence began in 1984, when she was given access behind the locked doors and bars of a women’s shelter to record the women’s stories. “They had all suffered broken bones and broken hearts. I was very touched by their stories and I knew I would never forget them,” she said.

“I also remember the times I read out on air Missing Persons notices from the police, and then finding out later that the woman or child whose face and name and description I had come to know over days or weeks had been murdered by the man who was meant to love them,” said Marner.

I still see her sometimes in my sleep. She is walking through the blue and orange lights of the city or in the desert country of red ground, spinifex and oaks. Last night I dreamed she was climbing a green and blue mountain, the kind you see in the tropics, rich and heavy with steam and rain. She is still only a girl in my dreams, but that’s how I remember her. In every dream she is walking. In every dream I call out her name. Tania.

Dr Annette Marner is an award-winning poet, novelist, fine art nature photographer and ABC radio broadcaster from South Australia’s Southern Flinders Ranges. Her first book, Women with Their Faces on Fire, won the Unpublished Manuscript Award for Poetry for Friendly Street/Wakefield Press and was on the reading list at Flinders University.

Since launching her fine art nature photography in 2017, Annette has exhibited her work in galleries including solo exhibitions and had her images published internationally. Annette is an Associate Member of the Royal South Australian Society for Arts (qualifying in 2019 for her photography) and has a PhD in creative writing from Flinders University.

A New Name for the Colour Blue is published by Wakefield Press and is available from all leading book stores including Dymocks.

Image: A New Name for the Colour Blue – courtesy of Wakefield Press