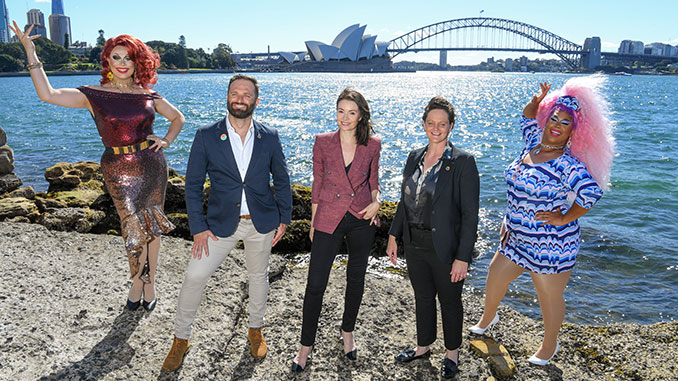 American Express has today commenced an exclusive three-year principal partnership with the Sydney Gay and Lesbian Mardi Gras. Additionally, the company will partner with Sydney WorldPride in 2023 – tipped to be the largest event held in Sydney since the 2000 Olympic Games and a southern hemisphere first.

As principal partner, American Express will work alongside Sydney Gay and Lesbian Mardi Gras and Sydney WorldPride teams to bring to life a festival of events across Greater Sydney that reflects and celebrates our diverse LGBTQI+ communities.

Corrina Davison, Managing Director for American Express Australia & New Zealand and Chair of the American Express Inclusion & Diversity Council for both countries says: “At American Express we value and embrace differences and believe unique perspectives, backgrounds and experiences are critical to the diversity of communities and the success of businesses,” she said.

“It is therefore with enormous pride that we take our place as principal partner of the Sydney Gay and Lesbian Mardi Gras and Sydney WorldPride 2023.”

“Today’s announcement demonstrates our unwavering commitment to backing the LGBTQI+ community and our long-standing promise to uphold an inclusive and welcoming workplace that reflects the diversity of the customers and communities we support,” said Davison.

The partnership between American Express, the Sydney Gay and Lesbian Mardi Gras and Sydney WorldPride also reveals a shared commitment to reinvigorate local businesses that have suffered through the hardships of the Covid-19 crisis – including Queer spaces that have been under pressure.

American Express’ major annual Shop Small campaign will be integral to this task – inspiring and incentivising customers to spend with small businesses, many of which are part of the LGBTQI+ business community.

“We’re very proud to have American Express join the Mardi Gras family as our principal partner,” said Albert Kruger, Sydney Gay and Lesbian Mardi Gras CEO. “As a global brand, they have the capacity to help spread the Mardi Gras message of equality far and wide.”

“While locally, American Express will help us immensely as we work with LGBTQI+ businesses to re-ignite the vibrancy and economy of our valued gaybourhoods across Australia,” said Kruger.

“Today marks 500 days until the Opening Ceremony of Sydney WorldPride 2023 when the eyes of the world will be on Sydney as we host a global celebration of LGBTQI+ arts and culture featuring the world’s largest LGBTQI+ human rights conference,” said Kate Wickett, Sydney WorldPride CEO.

“We welcome our partner American Express who is committed to diversity and inclusion in the workplace and in the community both here in Australia, and internationally. Sydney WorldPride 2023 will activate the community, corporations and governments to be part of the global movement for LGBTQI+ equality and human rights,” said Wickett.

For the past 16 years, American Express has scored 100 percent on the Human Rights Campaign’s Corporate Equality Index, based on the organisation’s policies and practices that support LGBTQI+ inclusion.

American Express’ principal partnership announcement continues the organisation’s commitment and involvement in the 2017 Marriage Equality debate and its work and membership in Open for Business, a coalition of global companies making the economic and business case for LGBTQI+ inclusion in companies around the world.

American Express is also an active member of Pride in Diversity and recently received Bronze status in the 2021 Australian Workplace Equality Index (AWEI).

“Being able to show up as your true self to work is pivotal at American Express,” said Stephen Maoudis, co-lead of American Express’ colleague PRIDE+ Network. “An inclusive environment that thrives on individuality and acceptance is at the heart of our culture.”

“Our dedicated PRIDE+ Network is committed to raising awareness and advancing changes that allow all people, regardless of their sexual orientation or gender identity, to be respected and valued.”

“Through this new partnership, we look forward to bringing these values and actions into the wider community,” said Maoudis.