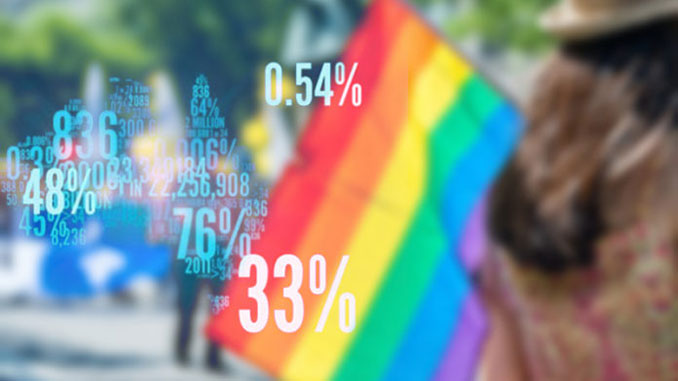 Equality advocates want a commitment from Labor to counting LGBTIQA+ Australians in the 2026 Census.

The national advocacy group has partnered with a number of LGBTIQA+ and allied organisations in a declaration that outlines the problems with not counting LGBTIQA+ people and the three simple questions that fix the situation.

“The Liberal/National Government has refused to count LGBTIQA+ people in the 2021 Census so we are asking Labor to be the solution by ensuring we are counted in 2026,” said Just.Equal Australia spokesperson, Dr Charlie Burton.

“When LGBTIQA+ people aren’t counted in the Census it is much harder to develop policies and plan services that meet our needs. Keeping LGBTIQA+ people in the data closet effectively says to us and to the rest of the nation that we don’t matter.”

“Since we released our Census Declaration last week the number of organisations that have signed on has almost doubled which shows the depth of concern about this problem in the LGBTIQA+ community,” said Dr Burton.

One group that has signed the Declaration is Intersex Human Rights Australia. “The more information we have, the better the policy decisions we can support that improve the day to day lives of people with variations in sex characteristics,” said Senior project officer, Cody Smith.

“Without a complete data set, we are yet to fully understand the extent of social inequality in Australia, including economic and education outcomes.”

Dr Burton urged LGBTIQA+ people to take advantage of the feedback box at the end of the Census which asks for how it can be improved. “If enough LGBTIQA+ people tell the Bureau of Statistics that we need to be counted, it will help create momentum for change in 2026,” said Burton.

The Census is on Tuesday August 10th.

The 2021 Census will not count LGBTIQA+ Australians. This will perpetuate the invisibility of a significant part of the population. The addition of three simple questions will solve that, allowing problems like stigma, discrimination and lack of services to be better addressed.

We the undersigned call on the federal government to commit to an inclusive Census in 2026. In the 2026 Census we want to see:

–      A separate question on sexual orientation

–      A separate question on gender identity

–      A separate question on variations of sex characteristics

Our reasons for this are outlined here:

The Australian Census occurs every five years and provides crucial information about the makeup of the population that helps inform how and where services are delivered to the Australian population. No Census has ever asked Australians questions on sexual orientation or variations of sex characteristics or whether they are trans or gender diverse.

Research shows that LGBTIQA+ Australians experience worse social and economic outcomes than other Australians, with members of these communities reporting difficulties in accessing health, employment and other services because of stigma and discrimination.

The 2021 Census was an opportunity to recognise and understand this population for the first time in order for state, territory and federal governments to better meet their needs. This has already occurred in comparable countries like Canada and the UK to the benefit of LGBTIQA+ people, their families and communities.

But the Federal Government decided the Australian Bureau of Statistics, which runs the Census, would not include questions that have been requested by a range of LGBTIQA+ organisations, and that meet the ABS’s own guidelines on the recognition of sex and gender. These questions would have told us the number of LGBTIQA+ Australians, where they live and what their needs are.

Instead, the ABS only included under ‘sex’ an option to also nominate ‘non-binary sex’. The question will not recognise Australians of diverse sexual orientations or sex characteristics and it cannot meaningfully be answered by the many trans and gender diverse people who do not identify as non-binary. It will therefore not produce any meaningful or valid data about the LGBTIQ+ population.

There is also a risk that, because it is likely only a small number of people will answer the question, the results will be used against the trans and gender diverse population by opponents who will cite the small number of responses to justify continuing discrimination against, and underinvestment in services for, this population.

We are also concerned that the Census in its current form renders many lesbian, gay and bisexual Australians invisible. Currently, the Census allows Australians to indicate if they are in a cohabiting same-sex relationship.

We condemn the 2021 Census for continuing to render LGBTIQA+ Australians invisible and to make it harder to address the stigma, discrimination and lack of services we experience.

We call on the Federal Government to commit to following its own guidelines on recognition of sex and gender by including in the 2026 Census the best practice questions already developed in consultation with the LGBTIQ+ community.