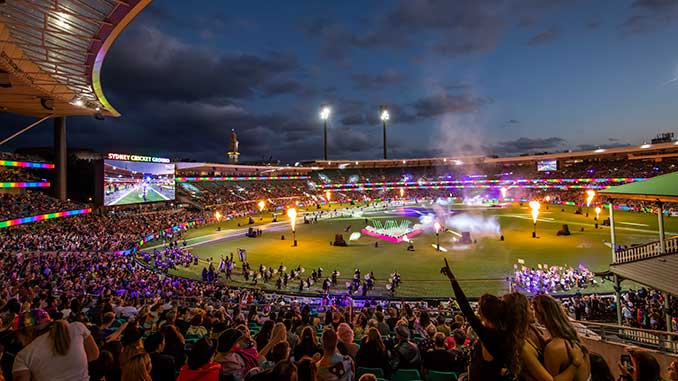 A powerful protest and glittering celebration of diversity, the Sydney Gay and Lesbian Mardi Gras Parade is the centerpiece of the Festival season. This iconic event brings together LGBTQIA+ people from all over to share their passion, champion equal rights and show their pride to the world.

In 2022, the Parade returns to the Sydney Cricket Ground on Saturday 5 March, where 40,000 spectators will cheer on as 5,800 marchers across 161 parade entries take to the field in a dazzling display of colour, community and love.

The 2022 Mardi Gras theme is UNITED WE SHINE, signifying that LGBTQIA+ communities shine brighter together and by standing up against hate and inequality as a collective, the message of love and inclusion is heard louder.

This year’s Parade entries have incorporated the theme into their final concepts that cover a range of issues important to the LGBTQIA+ community including trans rights, climate change, celebrating diversity and self-expression. Highlight entries in this year’s Parade include:

Dykes On Bikes
Dykes On Bikes is Australia’s longest-running female-identified motorcycle club and one of the countries oldest LGBTQIA+ community groups since 1987. With over 40+ motorcycles, this group is set to roar in this year’s Parade with their impact and presence. Dykes on Bikes have been a long-standing leader and supporter in the LGBTQIA+ community who are always open to welcoming a diverse range of people to participate in their events.

I Just Want To Be Me
Schondelmaier, aka Marcia Switch, is an 80-year-old transgender woman who has dedicated her life to giving guidance and assistance to the LGBTQIA+ community. Switch has taken part in the Parade for many years, and this year is no different! Wearing a fibreglass dress, Marcia wants to break the age barrier and set an example within the younger generation that age is just a number!

PEACOCK MORMONS
Peacock Mormons objective “Dare to do Different” embraces diversity and move the hearts of the entire community, regardless of religion, class, ethnicity and sexual identify or gender. Celebrating a powerful message “LOVE SHINES” this year, the group will walk the Parade dressed in 36 Pink Angels/Drag queens alongside Brad and Scott Harker (Founders) in a spectacular Pink Wedding attire and a massive train.

The Fabulous Wonder Mama
Wonder Mama is an all-round drag persona that has done many charity events and community events since 2014. This year, Wonder Mama will be wearing her classic superhero costume, bringing courage, joy, love and acceptance as their message through “SHINE LIKE HEROS”. Flying solo in the Parade, Wonder Mama will be entering the parade riding her three wheeled mobile scooter – The Mama Mobile.

The Itty Bitty Titty Committee
A crowd favourite throughout the years, this friend group are ready to unite the love of Australians for ABBA, and a lesbian’s love for labia. Celebrating lesbian sexuality, the Itty Bitty Titty Committee will shine in stunning costumes and perform ‘SOS’ by ABBA while saluting the extraordinary emergency and frontline workers who have carried us through the pandemic.

Rainbow Rebellion
Rainbow Rebellion is the Australian arm of Extinction Rebellion’s LGBTQIA+ group. Dressed up in red as politicians (including Scott Morison) and fossil fuel companies, the Rainbow Rebellion aims to highlight and unite queers and activists across the climate movement to take action NOW to prevent the worst effects of climate change. This year’s float is CODE RED for Humanity, which stems from the 2021 Intergovernmental Panel on Climate Change (IPCC) 5th report assessing the effects of climate change. The entry will feature queer activists from the environmental movement.

P-TYE (Parents for Transgender Youth Equity)
P-TYE is a protest organisation of a group of parents and carers of transgender youth who seek to achieve equity for transgender kids through policy and legislative changes. This year’s float stands out with the key message “HELP US” and “PROMOTE TRANS YOUTH EQUITY”. The Parade will see mostly middle-aged parents in full black with white print stating “SUPPORT TRANS YOUTH”.

Everyday Ability
Everyday Ability Pty Ltd are an LGBTQIA+ owned business offering services on the Central Coast of NSW. Working on a solid policy of inclusion in their recruitment and programs, they deliver catering directly to LGBTQIA+ participants with disabilities; this year’s float focuses on “Rise and Shine Everyday”. Dressed up as mirrors in reflective clothing showcasing their ability to look back and shine a light on the past while we all still march forward, Everyday Ability is ready to face a new day!

Free Gay and Happy
Free Gay and Happy (fgnhappy) is a social group of friends and friends of friends. Starting out as three fluffy bunnies on a stormy Parade day, wholly mesmerised, fgnhappy now have over 1,100 members. The group promotes the importance of mental health and the celebration of self. Parade participants will be dressed in personalised superman costumes, with each dancer carrying a Daily Planet Newspaper with the headline “Superman… I’m Coming Out!”

In his first live performance in Australia in a decade, singer-songwriter Darren Hayes returns home to head up a superstar line-up for the 2022 Mardi Gras Parade. Fresh off the back of the release of his new track: Let’s Try Being In Love, Hayes’ Mardi Gras performance will mark his 20th year as a solo recording artist, as well the 25th anniversary of Savage Garden’s acclaimed debut, self-titled album.

To ensure every minute of the 2022 Sydney Gay and Lesbian Mardi Gras Parade is available to as many Australians as possible, it will be live and exclusive on Saturday 5 March across these ABC channels;

The 2022 Sydney Gay and Lesbian Mardi Gras Festival is proudly supported by Principal Partner American Express, Government Partner and Sponsor of the Mardi Gras Festival, the City of Sydney, and Strategic Sponsor the NSW Government through its tourism and major events agency Destination NSW.

The 2022 Sydney Gay and Lesbian Mardi Gras Parade takes place on Saturday 5 March at the Sydney Cricket Ground. Rain or shine, the Parade will forge ahead. For more information and to check out the full list of Parade entrants, visit: www.mardigras.org.au for details.