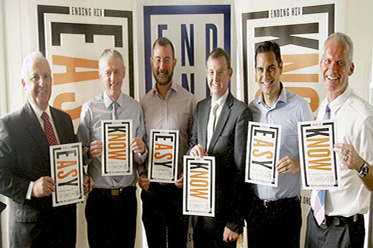 Oxford Street is set to host a temporary free rapid HIV testing facility during and after the Sydney Gay and Lesbian Mardi Gras as part of a new campaign aimed at increasing HIV testing rates among gay men.

Launched by the NSW Government’s LGBTI spokesperson and Member for Coogee Bruce Notley-Smith, the Oxford Street a[TEST] facility is being operated by ACON in partnership with the Sydney Sexual Health Centre and with the support of the NSW Ministry of Health, the South East Sydney Local Health District, the Kirby Institute and the City of Sydney.

Currently being trialled in almost 20 sites across NSW, rapid HIV tests provide on the spot results in less than 30 minutes.

Mr Notley-Smith also launched ACON’s new Test More campaign, the next stage of the agency’sEnding HIV initiative which aims to inform gay men about action they can take to help eliminate the transmission of the HIV virus from NSW by 2020.

“ACON’s new Test More education campaign coupled with this new free testing service during Mardi Gras are great examples of the innovative approach that we’re taking in relation to ending HIV transmission in NSW by the end of the decade.”

“During NSW’s annual celebration of LGBTI communities and culture, I encourage gay men to help us reach this goal by testing more regularly, either at the new a[TEST] Oxford St service, other rapid testing centres around NSW, or their local sexual health clinic or GP.”

“We estimate that up to 30% of HIV cases in NSW are undiagnosed and it’s these people, who are unaware of their status, who we particularly want to work with,” says Mr Orr.

“Once people know their status, they can take action to improve their health outcomes and prevent passing on the virus. And the only way they can know their status is to get tested regularly, at least twice a year.”

“Clearly it’s a numbers game and we won’t be able to achieve our goal of ending the HIV epidemic in NSW by the end of the decade unless we significantly increase testing rates among gay men – it’s that simple.

“We’re focused on communicating this message to gay men in NSW through campaigns like Test More. We’re also focused on making HIV testing easy, accessible and culturally appropriate through initiatives like our a[TEST] services in Surry Hills, Newtown and now this temporary facility on Oxford Street.”

“Antiretroviral treatment not only improves health and wellbeing but also reduces the risk of transmitting HIV to others,” says Dr McNulty.

“Rapid testing is a simple process which involves a finger prick of blood, with results available within 30 minutes.”

a[TEST] Oxford Street will operate out of a shopfront at 118 Oxford Street between 11.00am – 7.00pm from Monday to Saturday between 10 February and 22 March. You can just walk in or you can make an appointment by visiting: www.atest.org.au