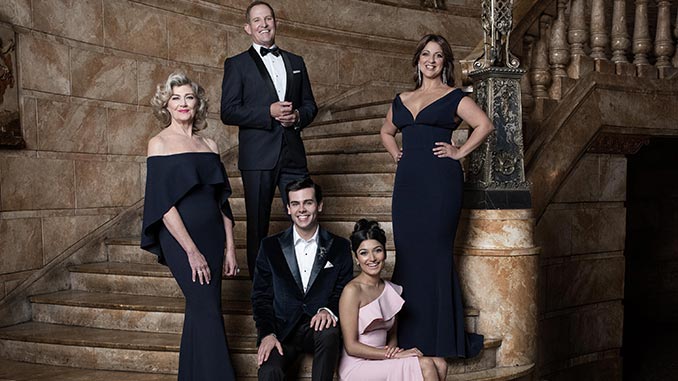 Lyndon Terracini for Opera Australia and John Frost for Crossroads Live have announced the lead cast for their contemporary retelling of one of the most loved musicals of all time, Rodgers + Hammerstein’s Cinderella. The Tony® Award-winning Broadway production will have its Australian Premiere in Sydney at the Capitol Theatre from 16 November 2021.

The role of Ella (Cinderella), a strong and intelligent young woman who dreams of escaping her endless chores so she might see the world, will be played by rising musical theatre star Shubshri Kandiah.

Shubshri shot to fame when she made her professional debut as Princess Jasmine in the Australian tour of Disney’s Aladdin. She also played Ismene in Antigone with Queensland Theatre, performed in The Pearlfishers, and has just completed a national tour of Belvoir’s Australian musical Fangirls.

Playing opposite Shubshri will be her Aladdin co-star Ainsley Melham as Prince Topher, the charming Prince of the kingdom who needs guidance and inspiration to realise his full potential.

Ainsley most recently starred as the title role of Pippin, the musical which reopened Sydney theatres, but has also featured as Aladdin across Australia and on Broadway, Molina in MTC’s Kiss of the Spider Woman, Sonny in Xanadu at the Hayes Theatre Co and is currently performing in Merrily We Roll Along at the Hayes.

One of Australia’s most loved performers, Silvie Paladino, will play Marie, a senile poor woman who magically transforms into her true form as Ella’s wise and compassionate Fairy Godmother.

Her many musical theatre roles have included Eponine (in Australia and London) and Fantine (London) in Les Misérables, Jeannie in Hair, Grizabella in Cats, Ellen in Miss Saigon, Donna in Mamma Mia!, Rita in Sideshow Alley, and Florence in Chess.

Returning to the stage after an extensive film and television career will be Tina Bursill, to play Madame, Ella’s stepmother, a vain and tyrannical woman only concerned with her wealth and the happiness of her two daughters at the expense of her stepdaughter.

Widely known for her current role as Meryl in Channel 9’s hit series Doctor Doctor, Tina began her career in revues and political satire, and has performed on stage for most Australian theatre companies and in the musicals Godspell, Grease and Manning Clark’s A History of Australia -The Musical.

The role of Prince Topher’s Lord Chancellor, Sebastian, will be played by Todd McKenney. Todd’s extensive stage career includes his acclaimed performance as Peter Allen in The Boy From Oz, and lead roles in Cabaret, La Cage aux Folles, Singin’ In the Rain, Anything Goes, Priscilla Queen of the Desert, Annie, Grease, Anything Goes and recently as Lord Farquaad in Shrek. Todd is perhaps best known as a judge on Dancing With the Stars.

Producers John Frost and Lyndon Terracini are delighted with their stellar cast. “Shubshri Kandiah is one of the newest shining stars in Australian musical theatre, and her chemistry with Ainsley Melham is truly breathtaking,” they said.

It’s been a dream of ours to work with Silvie Paladino for years and we finally get the chance to cast her as the Fairy Godmother. It’s a thrill to invite Tina Bursill back to the musical stage as the Stepmother, and to welcome back Todd McKenney as Sebastian.”

The US creatives were overjoyed when they auditioned these talented performers and are very excited they are joining the Cinderella family.”

“This is one of Rodgers & Hammerstein’s greatest scores and this production with beautiful orchestrations, magnificent costumes and sets, jaw-dropping transformations and all the moments you love from the classic story, will have audiences clamouring for more.”

Minister for Jobs, Investment, Tourism and Western Sydney Stuart Ayres said the Australian premiere of Cinderella in Sydney would give the state’s visitor economy a welcome boost by creating jobs and bringing visitors to the Harbour City.

“The NSW visitor economy stands to benefit significantly from hosting Rodgers +Hammerstein’s Cinderella and we look forward to welcoming over 20,000 visitors to Sydney to see this classic tale with a modern twist come to life on the stage,” said Mr Ayres.

“Musicals are a major contributor to the NSW visitor economy, and it’s exciting to see Ainsley Melham, Tina Bursill and Todd McKenney, outstanding Sydney and NSW talent, taking the lead in this production, delighting audiences and proving again why the NSW Government’s investment in major events and the creative industries is so important for the state.”

With its fresh new take on the beloved tale of a young woman who is transformed from a chambermaid into a princess, Rodgers + Hammerstein’s Cinderella combines the story’s classic elements – the glass slippers, pumpkin, a beautiful masked ball and more – along with some surprising twists.

More than just a pretty face with the right shoe size, this Cinderella is a contemporary figure living in a fairytale setting. A spirited young woman with savvy and soul, she not only fights for her own dreams, but forces the prince to open his eyes to the world around him and realise his dreams too.

One of Rodgers & Hammerstein’s most popular titles, Cinderella was written for television, debuting in 1957 starring Julie Andrews, who was nominated for an Emmy Award for her performance. More than 100 million viewers saw the broadcast, more people than any other program in the history of television at the time.

Cinderella was re-made for television in 1965 starring Lesley Ann Warren in the title role, Ginger Rogers and Walter Pidgeon as the King and Queen, and Celeste Holm as the Fairy Godmother.

A further television remake followed in 1997 with Brandy as Cinderella, Whitney Houston as the Fairy Godmother, Bernadette Peters as the Stepmother, Whoopi Goldberg as the Queen and Jason Alexander as Lionel.

The stage version of Rodgers + Hammerstein’s Cinderella made its long-awaited Broadway debut in January 2013, featuring a new book by Douglas Carter Beane and direction by Mark Brokaw, and it ran for two years.

Mr Beane’s book blends masterfully with the musical’s cherished score, with songs including In My Own Little Corner, Impossible/It’s Possible, Ten Minutes Ago and Do I Love You Because You’re Beautiful?

Rodgers + Hammerstein’s Cinderella is a romantic and exciting experience for anyone who’s ever had a dream.