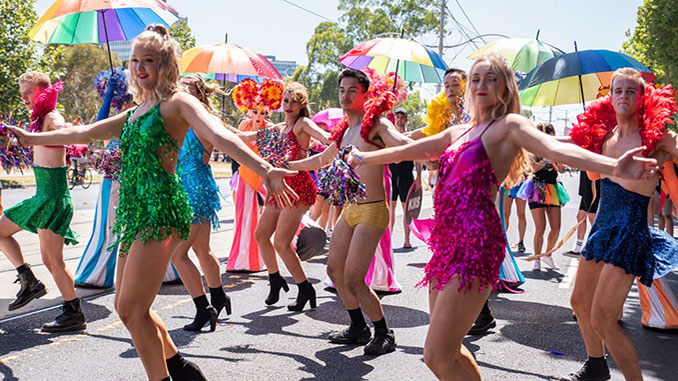 Midsumma Pride March: Sunday 5 February 2023 (date to be confirmed)
26 years ago, Melbourne’s LGBTQIA community took to the streets in a show of solidarity and pride. In 2023, more than 7000 marches will remember that the Midsumma Pride March is about affirming that we’re fabulous, we’re loved, we’re diverse and we’re proud. We all march in solidarity for those who can not.

GLOBE Community Awards: February 2023 (date to be confirmed)
Since 2014, the GLOBE Community Awards has become an integral part of Victoria’s LGBTI community – celebrating achievement in Victoria’s Lesbian, Gay, Bisexual, Transgender and Intersex communities, highlighting the work of a diverse range of organisations and individuals that benefit and unite the Victorian LGBTI community.

Melbourne Pride: February 2023 (date to be confirmed)
Melbourne Pride – a Road to Pride is a Victorian State Government initiative designed to celebrate the 40th anniversary of the decriminalisation of homosexuality within Victoria, marked by a one-day street party festival on Smith and Gertrude Streets, Fitzroy, that will be delivered by Midsumma.

Gaytimes Festival (Gembrook): February 2023 (dates to be confirmed)
Frolic in the forest you’ll never forget… Gaytimes is a boutique music, arts and camping festival for the whole lesbian, gay, bisexual, trans, queer and gender diverse community. Over two nights and three full days, Gaytimes will feature their most epic lineup yet across multiple stages. It is a festival that welcomes all the colours of the rainbow, and their friends.

ChillOut Festival (Daylesford): 9 – 13 March 2023 (dates to be confirmed)
From humble beginnings, ChillOut has grown to become the biggest and longest-running Country Queer Pride event in regional Australia. Now in its 26th year, ChillOut is recognised as a culturally important and nationally celebrated LGBTIQ pride event, supporting and representing Queer pride for all regional people.

Bendigo Pride Festival: March – April 2023 (dates to be confirmed)
The Bendigo PRIDE Festival is a community initiated and run event that celebrates, explores and promotes diversity and inclusion within the Loddon Malle Region with particular focus on LGBTIQA+ communities and people.

Melbourne Queer Mini Film Festival: 29 April – 1 May 2022
Melbourne Queer Film Festival is returning to the big screen this April with a mini film festival screening from Friday 29 April to Sunday 1 May 2022. MQFF Mini will screen 12 features and documentaries at Cinema Nova in Carlton, showcasing the latest award-winning films that celebrate LGBTQI+ stories.

South Side Festival: 6 – 15 May 2022**
Discover Frankston like never before. Over nine days, the inaugural South Side Festival comes to life with fantastical experiences and will feature close to 230 artists in over 50 performances in venues across Frankston. Experience the underworld, where darkness turns to light; water holds faces and voices that you can walk through; look out for the vintage ute turned into a curb-side, jazz club; circus lurches from the thrillingly acrobatic to the comically playful, plus so much more.

International AIDS Candlelight Memorial: (Melbourne) – Sunday 15 May 2022
A day to commemorate, in unison with other memorials worldwide, and to raise HIV awareness and remember the friends and family we have lost to AIDS, along with all people who continue to live with HIV.

RISING Melbourne: 1 – 12 June 2022**
On the first night of winter, artists, musicians and creatures of the night will pulse through a city reawakened. Across 12 nights, Melbourne will come alive with an array of free and family focussed events; transformative public art installations; large-scale performances; intimate works of theatre; dance that redefines the form; and a music program that traverses the globe

Southern HiBearnation: 11 – 19 June 2022
For more than 20 years bears from all over Australia, New Zealand and beyond have gathered in Melbourne for the biggest celebration of bear pride – Southern HiBearnation. Each year, Vic Bears put together a schedule of events for bears and their admirers to enjoy – from the big dance parties, to free films in the afternoon, hearty lunches, educational workshops and more. SH22 – The 7 Deadly Bear Sins

Bendigo Queer Film Festival: 15 – 17 July 2022
The Bendigo Queer Film Festival provides cultural and artistic opportunities to gay, lesbian, bisexual, transgender, intersex and queer (LGBTI) people living in Central Victoria. The Festival attracts people from all over Victoria and interstate. We are proud to be one of the few regional centres Australia wide, which hosts its own queer film festival.

Melbourne Fringe: 6 – 23 October 2022**
Melbourne Fringe transforms our city into a platform for every kind of artform imaginable, supporting over 3,000 artists to present 450+ works in 170+ venues to more than 360,000 people. Fringe celebrates freedom of artistic expression, taking voices from the margins and amplify them across the city – embracing risk through an un-curated festival which supports anyone to participate.

OUT in the OPEN Festival (Shepparton): 31 October – 13 November 2022
Now in it’s 11th year, there’s something for everyone in this 11 day celebration of the LGBTIQA+ community including performances, dining experiences, education opportunities, tours and sharing all wrapped up in a fun festival experience

OUT in the OPEN Carnival Day (Shepparton): November 2022 (date to be confirmed)
Celebrating LGBTI+ pride and community diversity, Carnival Day in Shepparton’s Queen’s Gardens is OUT in the OPEN’s big event. Wander through the stalls and markets; savour the smells and tastes of fresh local produce and home-made treats. There’s music, entertainment and information galore!

Melbourne Queer Film Festival: November 2022 (dates to be confirmed)
For more than 30 years, Melbourne Queer Film Festival (MQFF) has engaged the community to showcase the finest, contemporary queer cinema from Australia and beyond in the largest queer film festival in the Southern Hemisphere. The program encompasses Australian and International features, documentaries and shorts, including World Premieres, Australian Premieres, and Melbourne Premieres.

Carols by Queerlight: December 2022 (dates to be confirmed)
Back by popular demand, Carols by Queerlight makes its triumphant return for 2021. Join the Melbourne Rainbow Band and our special guests Rachel Dunham, Trudi Camilleri and Justin Clausen as we kick off the silly season in style. Also returning are the CbQ Singers – our seasonal choir will be returning to give voice to those Christmas hits. Stay tuned for more information!

Pride Cup
Pride Cup has grown into a national movement for change that transcends sport. Events are held throughout the year. Check the Pride Cup website for more details.

A Week of Leather: (dates to confirmed)
Over 7 days A Week of Leather (AWOL) celebrates the diversity of leather and fetish with the men who love it, live it and are it.

If your festival or event is not listed above, and you would like to submit for consideration, please send an email to: reception@australianpridenetwork.com.au Your festival or event must be not-for-profit and primarily coordinated by those who identify as LGBTIQ. (Events organised by individuals or commercial entities will not be considered)