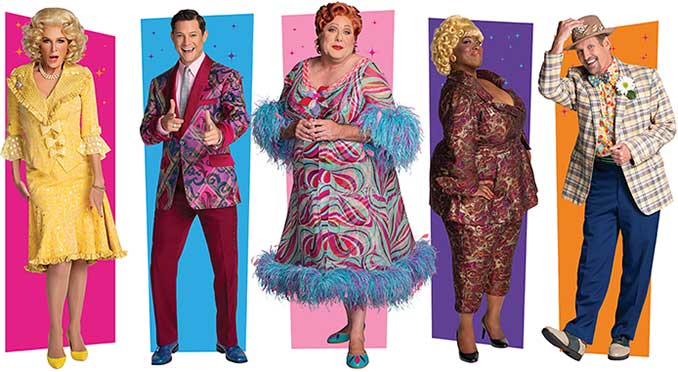 Some of Australia’s most-loved performers including Todd McKenney, Rhonda Burchmore, Rob Mills and Asabi Goodman are joining Shane Jacobson, as Edna Turnblad, to star in the upcoming premiere of the Tony Award winning Broadway production of Hairspray, set to open at the Regent Theatre in August.

“This is an unbelievable all-star cast the team have assembled for one of my most beloved musicals. The characters in Hairspray are iconic and loved worldwide, so it takes an exceptional group of performers to step into their shoes,” said Producer John Frost.

Playing the role of Wilbur Turnblad, Todd McKenney is an award-winning and critically acclaimed performer on stage and screen including his most notable role of Peter Allen in the Australian hit production The Boy From Oz, in which he performed over 1000 shows nationally and became one of the longest running and most successful musical productions in Australian history.

With a career spanning over 35 years, the vivacious, flame-haired Rhonda Burchmore will be stepping into the role of villain Velma Von Tussle. Burchmore’s career highlights include performing on London’s West End in Sugar Babies featuring Mickey Rooney and Ann Miller, Stop The World I Want To Get Off, Hot Shoe Shuffle, Red, Hot & Rhonda, Into the Woods, Mame, Easter Parade, Annie Get Your Gun and the original Australian production of Mamma Mia!.

The much-loved Rob Mills as Corny Collins, a role he was born to play, has built an impressive career across, television, film, stage & musicals over nearly 20 years including celebrated stage roles in Wicked, Ghost, Jesus Christ Superstar, Grease, Legally Blonde, The Last Five Years, Into the Woods, Hair and Chess.

Asabi Goodman, playing Motormouth Maybelle, is a Brisbane-based performer with over 40 years experience in vocal and stage performance. Her most recent credits include Once On This Island and the upcoming greatly anticipated Baz Luhrmann feature film, Elvis.

Set in 1962 in Baltimore, Maryland, Hairspray tells the story of dance-loving teenager Tracy Turnblad who has one dream – to dance on The Corny Collins Show.

When her dream comes true, Tracy is transformed from social outcast to sudden star and she must use her newfound power to dethrone the reigning Teen Queen, win the affections of heartthrob Link Larkin and integrate a TV network… all without denting her ‘do!