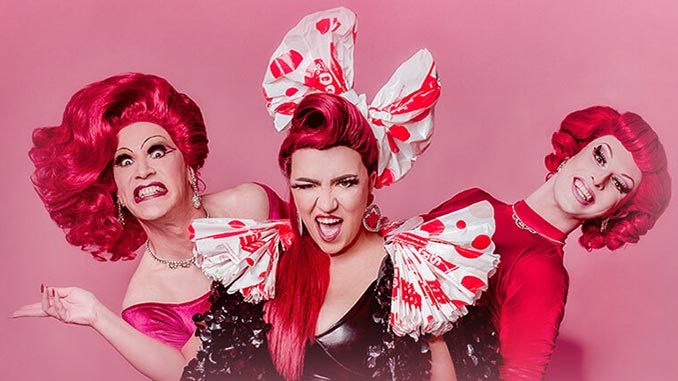 Due to the changing nature of the Covid-19 Lockdown in Melbourne, the 2021 Melbourne Cabaret Festival has made it necessary to amend dates and update shows. The 2021 Festival will now open on Saturday 19 June, running through to Sunday 27 June.

Featuring nine days of atmospheric, seductive and soul-stirring entertainment, Prinnie Stevens, Nina Ferro, Melbourne Accordion Orchestra and Tash York are just a few of the many performers who can’t wait to get back on stage and perform their new works.

“In a very short space of time we pulled off quite an astonishing feat. Following negotiations with our extraordinary cabaret performers, Chapel Off Chapel, the technical team and partners the show can go on!” said Melbourne Cabaret Festival Producers, David Read & Neville Sice.

“To work within the easing restrictions, within the space of 24-hours we have totally reconfigured the entire festival, moving shows to later dates in the festival to enable full rehearsals to take place.”

Highlights of the 2021 Melbourne Cabaret Festival include:

Prinnie Stevens in Lady Sings The Blues
A story about women in song, their hurts, struggles and pain whilst their beauty in music and life remains the same. Featuring the songs of the greats. Billie Holiday, Etta James, Ella Fitzgerald along with the modern day voices of Aretha Franklin, Whitney Houston, Beyonce and more. You will be transported from the speakeasy setting to the very heart of our Lady. Prinnie Stevens, Australia’s own RnB Soul Songstress.

Lachlan Bartlett presents: And I, In My Chair!
What’s more exciting than a man with a mullet in a dress? From the bogan pits of the Hunter Valley to the glitz and glam of Melbourne, Lachlan Bartlett and special guest Iva Rosebud deliciously dissect the life of a tradie by day, drag queen by night. Featuring crooner tunes that schmack of all things love, sex and booze including Marvellous Party (Noel Coward), Champagne Taste (Eartha Kitt), Windmills of your Mind (Dusty Springfield) and many more of your favourites.

LENNOX: Legend in my Living Room
Sweet dreams are made of this… Delve into a dreamy world of angels, heartbreak, androgyny, housewives, and danger, guided by our divine Songbird: Diva! She was born with the talent and charisma of a legendary Rockstar, but is cursed with an eternally broken heart and goliath ego. Diva is accompanied by a devilish guitar and sexy 80s synth and is sure to thrill. Lennox is a plunge into the music of Annie Lennox and Eurythmics in a theatrical rock concert setting.

Duets
Join iconic Melbourne comedy duo Kate Allnutt and Mitch Ralston for a classy evening inspired by the world’s most iconic duets. Be the first to witness the long-awaited reunion of two incredibly seasoned voices after their tragic separation last March. Duets is a powerful response to the past year; nothing like belting out some tunes with your best friend to get you through the tough times. Featuring an eclectic mix of your favourite songs, from classic to modern, pop to Broadway and beyond – their carefully curated set-list of acclaimed bops will have you crooning in the car on the way home.

Melbourne Accordion Orchestra present The Poor Man’s Grand Piano
Prepare for a journey through some great music sourced from the works of Randy Newman, Kurt Weill, Led Zeppelin and the rich history of music from New Orleans. Your guide along the road will be the Melbourne Accordion Orchestra (MAO), an ensemble with a 19 year history of continuous performance in this wonderful city of ours. For the Melbourne Cabaret Festival, MAO will be joined by Cameron Goodall, founding member of the ARIA award winning band, The Audreys, star of Sound of Falling Stars and a very special mystery guest.

The Broken Mill
You are cordially invited to The Broken Mill, a tumble down little cabaret theatre where wicked things happen nightly. With performances by the devilish matriarch Mama and her troupe of ‘children’ you are in for a spectacular show but beware, for Mama may not be all that she appears to be. Inspired by shows like Moulin Rouge, Cabaret and Chicago – The Broken Mill is an original cabaret by the award winning team at Picked Last For Sport, which tells a different tale of tragedy, clowns, fire, lovers, absinthe and murder.

Basically Nocturnal
A show for anyone that has ever tossed, turned or are now two days past their bedtime. Thomas Currie’s Basically Nocturnal is a punchy night of witty stories and songs, old and new. Amongst the tales, a band of synthesisers, drums and electric cello back Thomas’ powerful baritone voice. Crazy thoughts from the middle of the night make their way into this all-too relatable and funny cabaret.

Trash Talk
After a year where the bin went out more than she did, Tash York, is ready to take the stage after a socially distant year of stewing in her own thoughts! Backed by her fearlessly boozy backing singers, The Red Red Wines (Matthew Hadgraft & Vivian Fonteyn) expect an hour of smashing original and parodied songs, true stories, improv and probably a mention or two of her cats (she has 3 now). Calling out the Karens, cancelling the conspiracies and capsizing toxic positivity Tash York is bigger, brassier and more bold than ever!

Grant Busé: SentiMENTAL!
Remake. Reboot. Remix. Were the good old days really that good? Nostalgia ain’t what it used to be! SentiMENTAL celebrates and mocks the never-ending nostalgia assaulting our modern senses. After touring Europe for the last 2 years, comedian and musician Grant Buse returns to Melbourne to deliver a hilarious music-fuelled deconstruction of our selective memories.

Nina Ferro Presents: Lady Soul – The Songs of Aretha Franklin
The undisputed Queen of Soul created a legacy that spans six decades. Over the course of her career, Aretha Franklin garnered 44 Grammy nominations, winning 18, and became the first woman to be inducted into the Rock and Roll Hall of Fame in 1987. Her powerful, distinctive gospel-honed vocal style has influenced countless singers across multiple generations. Accompanied by her band Soulville, Nina Ferro pays tribute to Aretha in celebration of the life of a woman who has influenced generations of singers and touched the lives of so many.

The Melbourne Cabaret Festival is proudly brought to you with the support of the City of Stonnington and the Ron and Margaret Dobell Foundation.