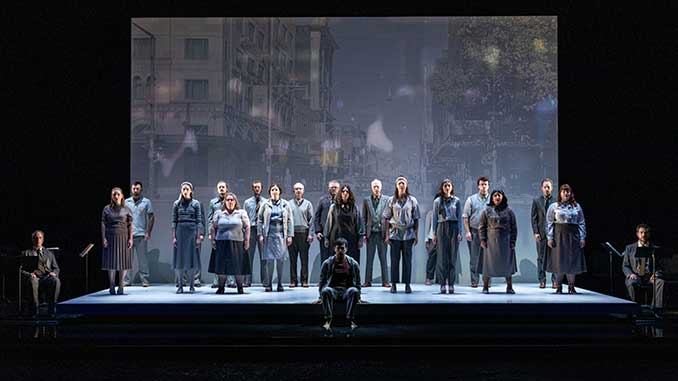 Death ultimately renders us mute. But it might not silence the truths one has remained silent about in life. “I would not identify as a homosexual”, Dr George Ian Olgilvie Duncan tells us as part of composer Joseph Twist and librettists Alana Valentine and Christos Tsiolkas’s immersive experience and powerfully affecting new work, Watershed: The Death of Dr Duncan. It turns out the irony of such concealment doesn’t come more pivotally life-changing for so many people to come.

Now 50 years on from Dr Duncan’s tragic drowning in the nearby Torrens River on 10th May 1972, presumed to be at the hands of police brutality, a majestic, poignant and intriguingly multi-faceted homage to his existence resonates large. With no conviction for a crime committed, how long will the silence of those responsible for his death persist?

Co-commissioned by Feast Festival, Adelaide Festival and State Opera South Australia, Watershed cascades over many levels, not least the injustice relating to Duncan’s death but on crimes of hate, on community outrage and change and on the ultimate indispensability of love.

Out of Duncan’s death came the eventual repeal of anti-discrimination laws that condemned and tortured homosexuals, making South Australia the first Australian state to do so. As a 41 year old university lecturer newly arrived in Adelaide, in death, Duncan has become an unlikely hero of sorts.

Twist’s music supports it with an arabesque intricacy that beautifies sensuality before painting an eclectic soundscape matching a narrative oscillating between factual reality and poetic reflection.

At Thursday’s opening night, the score glistened and pulsated with assured strokes under conductor Christie Anderson and her band of 12 expertly flexible musicians.

For the stage, Watershed is married by celebrated director Neil Armfield with thoughtfully embraced choices and enacted with diverse intent in a series of confronting, moving and sometimes uplifting tableaux.

But it is the chorus – the Adelaide Chamber Singers are a splendiferous and talented singing crew fully integrated and engaged in the storytelling – that is the work’s outstandingly buttressed framework from which splinters individual voices of the people alongside soloists portraying key persons.

Most compelling is the shear translucency, solemnity and textural depth of many of these choral passages, including a haunting hymnal accompaniment as Duncan suspends between life and death, “gulping and crying for God” – one of several scenes when libretto and music bring us unerringly face to face with Duncan’s humanity.

Golden-voiced tenor Ainsley Melham is an ongoing shining presence as the narrator and “Lost Boy” who puts heartfelt meat on the story’s circumstantial bones. Superb dancer Mason Kelly forms an integral part of the narrator’s journey, dangling from a cable as a life imminently lost to the river, writhing in its waters in death and, in a transfixing finale, raised in remembrance and hope.

Tenor Mark Oates sings with distinguished strength and emotive weight as both Duncan and former SA State Premiere Don Dunstan, while cavernous bass, Pelham Andrews is convincing and striking in the characters of Murray Hill, a Liberal Party member who introduced a bill to amend the law that criminalised homosexuality, and former vice squad officer Mick O’Shea who brought to light a police cover-up.

Set and costume designer Ailsa Paterson provides an excellent but uncomplicated visual comprehension of the work. A channel of water sits in the foreground with a rudimentary platform and wall behind on which Sean Bacon’s evocative and instructive audiovisual designs appear.

Complimented by Nigel Levings’ muted lighting, every entire effect serves the power of the moment. In the end it is easy to see how, what is traditionally thought of as being reserved for sacred music, this oratorio-inspired concept perfectly assists in the elevation of Duncan’s unintended legacy.

Significantly, a lasting impact remains that the injustice witnessed here is but a skerrick amongst the horrible injustices that persist. Watershed is a phenomenally poignant facilitator in this conversation.