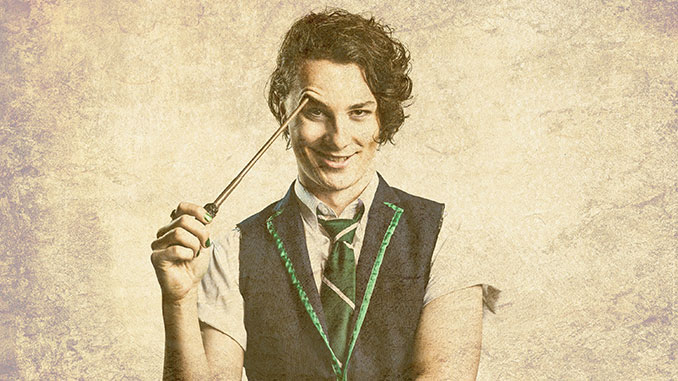 Wizarding school is back in session – not even COVID can stop the magic, mayhem and teenage hormones! Presented by Salty Theatre, Theatre Works and Red Hot Productions, He Who Must Not Be Named apparates to Australian shores this March.

Before Voldemort was “He Who Must Not Be Named”, he was just Tom Riddle, another moody teen that couldn’t talk to girls. Join Tom and his Hogwarts classmates on a hilarious musical adventure as he learns the ways of love, proper snake maintenance and the Unforgivable Curses.

This Harry Potter musical parody is sure to leave you spellbound! Following two hugely successful back-to-back seasons at The Edinburgh Fringe and sold out performances at The King’s Head in London, Voldemort And the Teenage Hogwarts Musical Parody hits Australia for the first time ever.

Created by Los Angeles based comedians Zach Reino (A.P. Bio, Crazy Ex-Girlfriend) and Chris Grace (Superstore, This Is Us) this hour-long pop rock musical invites you to experience the World of Hogwarts like you’ve never seen it before.

Teen angst, hormones and young love fill the magical halls, along with a few familiar and much-loved characters as they sing about Cutting Your Soul, Care of Magical Creatures, and Love That Must Not Be Named.

“As a Potterhead, the opportunity to introduce this hilarious, off-centre and brand-new look at the World of Potter that we love so much was one that we couldn’t miss,” said Salty Theatre Co-Founder Ashley Taylor. “We’re thrilled that it offers all of the diehard fans a glorious taste of the Wizarding World they adore but in a more adult way.”

“It’s a ridiculous Voldemort Origin Story that blends everything fans embrace with humour that wizarding fans and muggles alike can relate to. It really is the perfect cure by laughter for the difficult year we’ve all been through. Come. Side-splitting laughter really is the best medicine,” said Taylor.

Salty Theatre was co-founded by theatre, dance and cabaret veteran Sarahlouise Younger and Canadian theatre and screen vet Ashley Taylor. In its short existence has begun making a mark with their commitment to being an advocate for Women, BIPOC, CALD and LGBTQIA+ in creative leadership and performance spaces.

As a female-led independent musical theatre company that connects writers, directors, producers and performers from across the globe to form new creative partnerships and present and develop new, never-before-seen, or rarely-produced works to Australian audiences.

Running this March through April at Theatre Works, Voldemort And the Teenage Hogwarts is a raucous musical comedy that lifts up its robes to give you a glimpse into the secret world of witches and wizards. Get your wands ready.

Note: Voldemort and the Teenage Hogwarts is not authorized, sanctioned, licensed or endorsed by J.K. Rowling, Warner Bros. or any person or company associated with the Harry Potter books, films or play