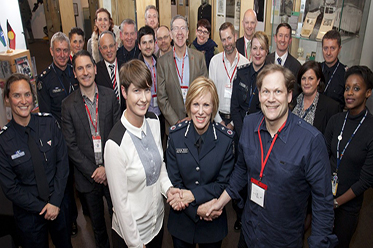 Victoria Police has taken a positive step towards strengthening its relationship with the Lesbian Gay Bisexual Transgender and Intersex (LGBTI) community by making an apology to those who were affected by the Tasty Nightclub incident.

This reference group, which is made up of LGBTI community leaders and representatives, will meet quarterly to discuss concerns and issues in the LGBTI community. A number of people who were present at the Flinders Lane venue on the night of the incident were also in attendance.

Acting Chief Commissioner Nolan acknowledged the event had impacted the lives of the 463 people who were there on the night.

“The events that took place that night caused distress to people and had a significant impact on the relationship between Victoria Police and the wider LGBTI community,” she said.

“It is therefore appropriate we extend a sincere apology to the community members who were affected by the events on that night and also to the broader LGBTI community for the impact this event has had on our relationship over the past two decades.”

Acting Chief Commissioner Nolan said Victoria Police had worked with the LGBTI community on a number of initiatives over the past 20 years, including:

• the Gay and Lesbian Liaison Officer (GLLO) program, which enables LGBTI people to access police services and assistance when needed;

• a police presence and participation the Midsumma Festival and Pride March;

• flying the gay pride flag at the Victoria Police Academy; and

• the recent establishment of the Priority Communities Division, which is working with LGBTI community leaders to identify and implement measures that will further cement this positive relationship.

“While Victoria Police has made great strides in regards to the recognition and celebration of diversity of gender and sexuality within our community, we know that there is still work to be done,” Acting Chief Commissioner Nolan said.

“We know there is under reporting of homophobic, biphobic and transphobic incidents and offences. We understand that in order for these reporting rates to increase, the LGBTI community needs to have confidence that their reports will be taken seriously and their complaints will be treated respectfully.

“We are committed to ensuring that every LGBTI Victorian has a positive experience with our organisation whether they approach us for help, see us in the street, or indeed work within our ranks or aspire to do so.”