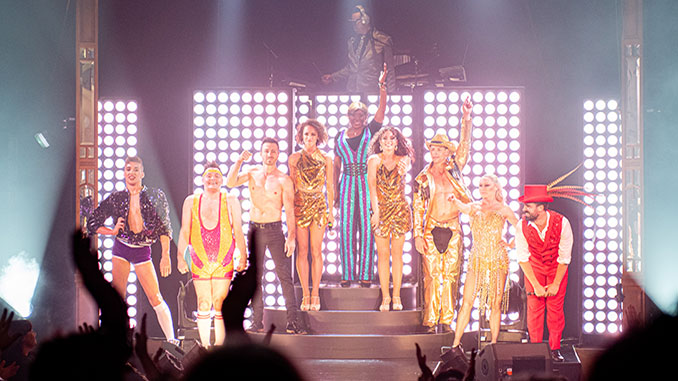 A glittering spectacle of circus, cabaret and a love-letter to disco, Velvet Rewired will be presented in the Studio – Sydney Opera House from 7 October – 14 November 2021.

Premiering at the 2020 Adelaide Fringe festival to glowing reviews, Velvet Rewired continues the story of a young man on his path to self-discovery as he returns to the club seeking redemption.

To the hedonistic tunes of perpetual anthems like Ain’t No Body (Chaka Khan and Rufus), It’s Raining Men (The Weather Girls) and Born to Be Alive (Patrick Hernandez), Velvet Rewired pays homage to disco greats and New York’s Studio 54, the infamous club synonymous with a celebration of cultural acceptance, glitter and disco.

“I am thrilled to invite audiences in for a celebration of the glitz and glamour of the disco era,” said Sydney Opera House Head of Contemporary Performance, Ebony Bott. “The queen of disco herself, Marcia Hines, along with an incredibly talented cast, deliver a performance of circus, burlesque and cabaret that will give audiences a dose of feel-good disco fever.”

Directed by Craig Ilott (Hedwig and the Angry Inch, Love Song), Velvet Rewired is a seamless integration of acrobatics, aerialists and vocalists who deliver a performance drenched in high energy and dizzying nostalgia. Ilott directed the original Velvet that premiered at the Opera House in 2015.

Velvet has left behind glitter and good vibes after more than 1200 performances in some of the world’s biggest fringe festivals including Adelaide and Edinburgh, in cruise ships in the Caribbean, and theatres in Germany, France and Italy.