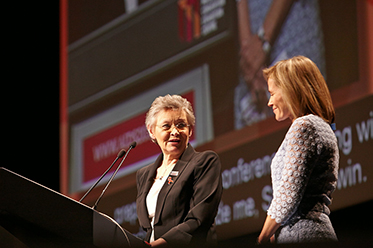 Tributes have been paid at the opening session of the 20th International AIDS Conference to the six delegates who lost their lives aboard flight MH17.

A one minute global moment of remembrance was held in their honour with eleven former, present and future Presidents of the International AIDS Society onstage together with representatives from those organizations who lost colleagues, the World Health Organization, AIDS Fonds, Stop AIDS Now, The Female Health Company, the Amsterdam Institute for Global Health and Development and members of the Dutch HIV research community

A letter of condolence and support was also read out by Mr Lambert Grijns, The Dutch Ambassador for Sexual and Reproductive Health and Rights and HIV/AIDS. Condolence books are circulating onsite at the conference for the duration of the event.

Some 12,000 participants from all over the world have gathered in Melbourne for the start of the 20th International AIDS Conference (AIDS 2014). Under the theme Stepping up the Pace, during the five days of the conference delegates will discuss the latest research developments and will hear about the status of the epidemic from world renowned experts.

At the AIDS 2014 Opening Sessions, speakers discussed the encouraging data related to access treatment and reducing new HIV infections, but reminded the audience that HIV is far from being defeated and that stigma and discrimination towards Key Affected Population pose a major barrier to the end of the epidemic.

“The tremendous scale-up of HIV programmes has, for so many people transformed HIV from a death sentence into a chronically manageable disease,” said Professor Françoise Barré-Sinoussi, AIDS 2014 International Chair, President of the International AIDS Society (IAS) and Director of the Regulation of Retroviral Infections Unit at the Institut Pasteur in Paris told delegates attending the opening session on Sunday night.

“One-third of people living with HIV, who need treatment now have access to it. Nevertheless, these remarkable achievements are still not enough, 22 million people still do not have access to treatment. The official AIDS 2014 theme reminds us that we need to step up the pace and redouble our efforts. Too many countries are still struggling to address their HIV epidemic with their most vulnerable people consistently being left behind”.

UNAIDS Executive Director Michel Sidibé said that efforts to increase access to antiretroviral therapy are working. In 2013, an additional 2.3 million people gained access to the life-saving medicines. This brings the global number of people accessing ART to nearly 13 million by the end of 2013. Based on recent scale-up, UNAIDS estimates that as of July 2014 as many as 14 million people were accessing ART.

“If we accelerate a scale-up of all HIV services by 2020, we will be on track to end the epidemic by 2030,” said Mr Sidibé. “If not, we risk significantly increasing the time it would take, adding a decade, if not more.”

“There is so much to admire in Australia´s well documented response to HIV. Its bipartisan political approach, its inclusion of key affected communities and the capacity building in science and research have all been major drivers in Australia having one of the lowest rates of HIV infection worldwide,” said Professor Sharon Lewin, Local Co- Chair of AIDS 2014, Head of the Department of Infectious Diseases, Alfred Hospital and Monash University and Co-Head of the Centre for Biomedical Research at the Burnet Institute in Melbourne.

“But, as much as the Australian experience has been successful, our neighbours in the Asia Pacific region have not lived the same experience. It is a key objective of the 20th International AIDS Conference to shine a light on those men who have sex with men, sex workers, transgender people and people who use drugs who do not have the same access to treatment, care and prevention as their western colleagues may do.”