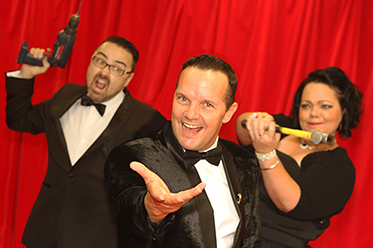 Imagine spending your whole life constantly playing someone else. Three talented performers, Luke Gallagher, Michael Dalton and Rachel Dunham come together in a brand new show to shed their skins – but it will be on their own terms, determined to take top billing in this cabaret showdown.

Michael Dalton is known for his comedy cabaret alter ego in a frock, Dolly Diamond, the sharp witted diva that has had audiences all over the world in stitches thanks to her clever wit and sharp tongue.

Michael Dalton has been entertaining audiences for over thirty years in hit shows like The Rocky Horror Show, Naked Boys Singing and various Julian Clary shows in the UK, Australia, Europe and the USA. His hit Midsumma 2014 show You’ve Got Male saw him take to the stage as himself once again and the response was incredible.

Rachel Dunham has spent the last two years filling the shoes of Oprah Winfrey in her acclaimed cabaret show Oprahfication. This award winning cabaret from the 2012 Short and Sweet Festival was written and composed by Rachel and Shanon D. Whitelock.

Oprahfication enjoyed seasons in Melbourne, Adelaide and Sydney and was recently nominated for two Green Room Awards. Rachel Dunham has also worked extensively in the Australian musical theatre and live music scene including the Australian tour of Rock of Ages.

Luke Gallagher has worked as a solo artist in his shows The Gospel According to Luke and The Boy Next Door as well as a number of cabaret collaborations over the last twenty years, including his Green Room award-winning cabaret trio Friends of Barbra and his work with Dolly Diamond over the last five years.

He has played seasons in New York, London, Berlin and in cities all over Australia. These days Luke spends his days producing international theatre tours, so he’s thrilled to be coming out of semi-retirement and returning to the cabaret stage with two talented colleagues in this fun new show!

The Three of Us features a four-piece band under the musical direction of Cameron Thomas and Shanon D. Whitelock with the music of Cole Porter, George Gershwin, Jerome Kern, Marvin Hamlisch, Destiny’s Child and so much more.

The Three of Us is presented as part of the Melbourne Cabaret Festival and promises audiences an evening of fun jazz, swing and parody that will be anything but standard.