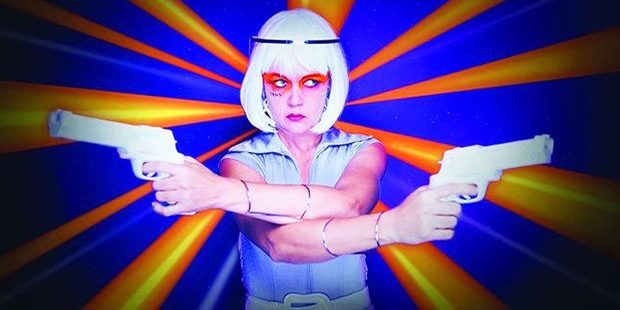 A queer sci-­fi love story that celebrates the strength we find through our difference, The Motion of Light in Water is a thrilling journey into the imaginative possibilities of science fiction, inspired by the life and work of a truly original and subversive figure, Samuel R. Delany.

In the early 1960s, Chip and Marilyn – born in a violent New York City – support one another in their struggles against intolerance and poverty. But for Chip, the only way he’s allowed to publish the truth about his subterranean identity, both racial and sexual, is in books with spaceships on the cover.

Far in their future, in a world threatened by the mysterious Invaders, poet Rydra Wong discovers an alien language, Babel-17, and sets out on a quest that will either save civilisation, or destroy it. With the assistance of a mysterious figure known only as Jewel, her path will converge with Chip’s – and transform the way we look at our shared future.

Created by award-­winning Melbourne company, Elbow Room (Green Room wins for writing, directing and ensemble performance), The Motion of Light in Water is inspired by Delany’s autobiography of the same name, as well as his novels Babel-­17 and Empire Star, and Marilyn Hacker’s acclaimed poem The Navigators.

Samuel R. Delany is an Award Winning American author, professor and literary critic whose credits include Babel-­17 and The Einstein Intersection. He is the winner of four Nebula awards, two Hugo awards and earned a place in the Science Fiction and Fantasy Hall of Fame. In 2013, The Science Fiction Writers of America named him its 30th SFWA Grand Master.

The Motion of Light in Water is presented by La Boite Indie and Elbow Room with the support of QPAC. Commissioned by HotHouse Theatre with support from Theatre Works and Arts Victoria.

Image: Emily Tomlins in The Motion of Light in Water – photo by Sarah Walker / design by Sean Dowling