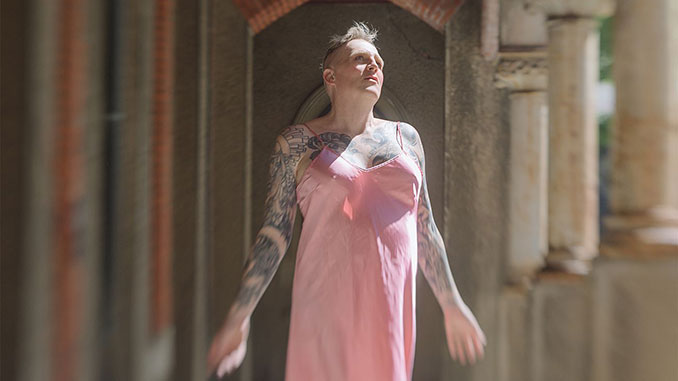 A Transgender Jesus will descend upon Melbourne to impart blessings at this year’s Midsumma Festival as Theatre Works presents the Australasian premiere season of The Gospel According to Jesus, Queen of Heaven from 1 May 2021.

The play puts a transgender playwright and performer at the forefront asking us to stop and think: how inclusive are we really? Whilst provocative and challenging, it’s not watching or reading the play that is most powerful, it is how the play reads you, and brings your own hidden thoughts into the light.

This unique show combines theatre with storytelling and ritual to produce a rare and beautiful reflection on the life of Jesus, a transgender one, and a provocative meditation on a more truthful and generous interpretation of her words. It imagines Christianity’s message of love extending to embrace all those traditionally excluded because of their sexuality or gender.

Written and first performed by Scottish playwright Jo Clifford at Glasgow’s Tron Theatre in 2009, her play attracted full houses, as well as 500 demonstrators outside the theatre and the massive interest generated across social media (500,000+ hits on Google) indicating the importance of the work on a national and international scale.

In 2016, at the epicentre of an anti-censorship and human rights movement in Brazil, Jo’s play is still touring South America years after its triumphant arrival. In 2021, Queen Jesus will make her Australasian debut at Theatre Works as part of Midsumma Festival with Kristen Smyth in the iconic role.

“Jesus Queen burns so bright she makes us see the light inside ourselves with stories of authenticity and courage born of a queerness that transcends anything I’ve ever experienced,” said Kristen Smyth.

Directed by Kitan Petkovski, the production will feature original compositions by Rachel Lewindon, and be performed by a choir of LGBTQI+ artists, including Mel O’Brien, Tom Parrish, Willow Sizer and Sherry-Lee Watson.

“Profound and moving, witty and filthy, a wake-up call to tolerance, love and acceptance with an intoxicating secular potency” – The List

The Gospel According to Jesus, Queen of Heaven
Theatre Works, 14 Acland Street, St. Kilda
Season: 1 – 8 May 2021
Information and Bookings: www.theatreworks.org.au

Image: Kristen Smyth to feature in The Gospel According to Jesus, Queen of Heaven – photo by Sarah Walker