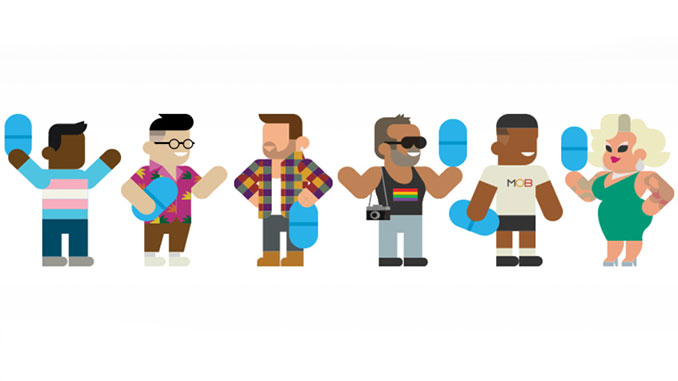 A new awareness campaign from NSW’s leading HIV and sexuality and gender diverse health organisation, ACON – Take Me highlights the different ways in which gay and bisexual men can use the HIV prevention drug PrEP to protect themselves and their partners from HIV.

There are now three dosing regimens, or ways to take PrEP, that are all highly effective at protecting people from HIV when used correctly and consistently. These include: Daily PrEP, PrEP-On Demand[1] and Periodic PrEP. Up until this point, ‘Daily PrEP’, or a pill once a day, has been the way most people who have been prescribed PrEP have used it.

Periodic PrEP is essentially daily dosing for a limited period of time when someone is expecting to engage in sex, such as a few weeks during a holiday or party period, rather than committing to long-term daily dosing.

“PrEP is now the most commonly used HIV prevention strategy for gay men. This means, that for gay and bisexual men, even if they are not taking PrEP, chances are they will meet someone who is and it will affect the decisions made when it comes to sexual practices,” ACON’s Acting Director, HIV & Sexual Health, Matthew Vaughan said.

“For many people, their sex life may not warrant taking a pill each and every day, or they may have been concerned about side effects. For these people ‘Daily-PrEP’ wasn’t an option. We hope that with these new dosing regimens, PrEP use will be an even more appealing and greater option for more people in looking after their sexual health.”

“Over the past few years, we continued to record low rates of HIV notifications in NSW and this is because gay and bisexual men, and men who have sex with men are testing more often, treating early and staying safe,” said Mr Vaughan. “However, it should be no surprise that the coronavirus pandemic also had an significant impact on how our communities interacted with each other and our sexual health.”

“Many gay men listened to public health orders during the height of the pandemic in 2020 and took responsible steps to protect themselves. For most, this meant following specific advice regarding physical distancing and refraining from casual sex. As a result, many took a pause from using PrEP, as well as their HIV and STI testing routine.”

“As restrictions ease and life returns to a new ‘COVID normal’, it’s time to resume the practices that protected our sexual heath, and that of our partners. This means getting tested regularly for HIV and STIs and, and if you were on PrEP, starting to take it again before you have sex.”

“We thank everyone in our communities across NSW for continuing to take action and heeding the call over the years to end HIV transmissions by consistently using HIV prevention methods, like PrEP and condoms, and testing often and regularly. It’s now easier than ever to prevent HIV, get tested and take control of your own sexual health.”

“Whether you’re already using PrEP, have used it previously and may have stopped, or have never taken it before, more ways to take PrEP means there’s an option for everyone – start by having a conversation with your doctor about what best works for you,” said Mr Vaughan.

The new ACON Take Me Campaign includes, online, print, outdoor and radio advertising, and is available on the ENDING HIV website and through gay community venues in NSW. For more information, visit: www.endinghiv.org.au for details.