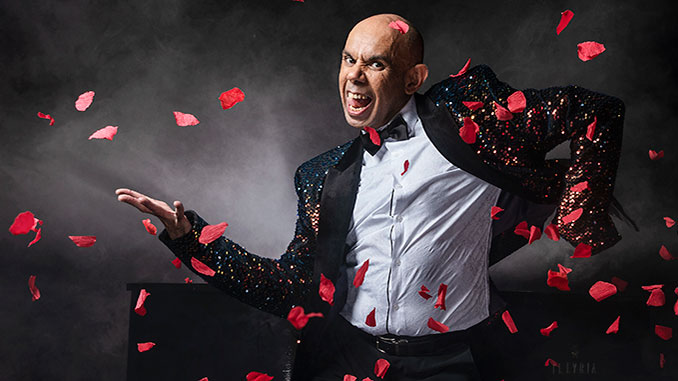 The show, which has dazzled audiences around the country, delves into stories from Steven’s own life, traversing queer spaces, racism, love, loss and fame, blending his trademark comedic wit with unflinching honesty.

“Despite the immense wealth of talent and sexiness on stage (x2), I’m still so surprised that Bigger and Blacker continues to have these amazing opportunities. That sentiment grows tenfold when I get to perform at certain places or Festivals,” says Steven.

“From the Sydney Opera House last year to my hometown Shire Hall in Cloncurry or Townsville’s Civic Theatre across from my old High School, these places are like milestones in my life as a performer.”

“Getting ready for my first ever Melbourne International Comedy Festival at the esteemed Malthouse Theatre is another milestone that I’ll celebrate and remember.”

“I’m certain it will be an antidote for me and audiences across the town for the ongoing saga of the last couple of years. I love Melbourne and can’t wait to be back. Bring on MICF 2022!” says Steven.

Steven Oliver is a descendant of the Kuku-Yalanji, Waanyi, Gangalidda, Woppaburra, Bundjalung and Biripi peoples. He was born in Cloncurry in North-West Queensland and grew up in Townsville before moving to Perth to study performing arts.

He has worked with numerous theatre companies and arts organisations across Australia but became notorious with ABC’s hit sketch show Black Comedy as a writer/actor/associate producer.

He has starred in ABC iview’s Tiger Cops, hosted A Very Sexy Xmas for ABC TV and was one of only two recipients of Screen Australia’s inaugural Blackspace Initiative that saw the creation of his premiere web series A Chance Affair.

He is also a published poet and playwright and recently featured in the 2018 National Play Festival with his play From Darkness We Came. His poetry and comedic work has collectively garnered tens of millions of views online with his comedic work bringing him to the attention of renowned director, Taika Waititi.

This led to a cameo that saw him alongside Chris Hemsworth and Jeff Goldblum in Thor: Ragnarok. Currently he is an artist in residence with La Boite Theatre Co and is freelancing as a writer/performer.

Described by the West Australian as “one of the most consummate male cabaret performers in Australia at the moment” – Michael Griffiths has made a name for himself in cabaret across the globe since his debut at Adelaide Cabaret Festival in 2011.

He was nominated for a Green Room Award Best Supporting Actor for his performance as Bob Crewe in Jersey Boys in 2014, won the Best Cabaret Adelaide Fringe Award in 2014 won the Helpmann Award for Best Cabaret Performer for his Cole Porter tribute in 2016.

He is musical director for Les Girls icon Carlotta and Artistic Director for the Perth International Cabaret Festival 2022.

“Bigger and Blacker is destined to be one of the most important shows in the Adelaide Cabaret Festival….We need more voices like Steven’s, ones who might also appear initially as ‘the clown’ but who can then take us to the heart.” – The Adelaide Show