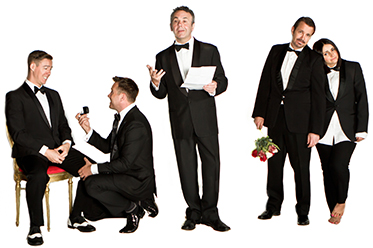 As equal marriage rights approaches reality in Australia, a poignant series of short plays will be presented in an Australian premiere as part of the 2014 Midsumma Festival.

Standing On Ceremony – The Gay Marriage Plays are described as a deliciously funny and represents what can and should and will be, whilst celebrating same sex marriage and how a number of American states embraced and passed equal marriage rights.

Focussing on the moments before, during and after I do, the plays featured are: The Revision by Jordan Harrison – an amusing look at how two men might rewrite their vows to more accurately reflect the limited options available to a gay couple; This Flight Tonight by Wendy MacLeod – asks if there is any hope for happiness when a lesbian marriage begins in Iowa.

The Gay Agenda by Paul Rudnick – is a sadly hilarious plea for understanding by an Ohio homemaker and member of Focus on the Family; On Facebook by Doug Wright – was adapted from an actual Facebook thread chronicling one long fight among friends on the subject of gay marriage.

Strange Fruit by Neil LaBute – is the story of two men in love whose plans to get married “the old-­? fashioned  way”  are  stymied when  reality  rears  its  ugly  head; Traditional Wedding by Mo Gaffney – a long-­?married lesbian couple reminisce about their wedding.

My Husband by Paul Rudnick – puts a hilarious gay twist on the stereotype of the Jewish mother desperate to marry off her children; London Mosquitoes by Moisés Kaufman – is a poignant story in which a widower tries to make sense of the loss of his longtime lover; Pablo and Andrew at the Altar of Words by José Rivera – is a moving play about two men who use their marriage vows to “say the things we never really say.

Witty, warm and occasionally wacky, Standing On Ceremony – The Gay Marriage Plays are vows to the blessings of equality, the universal challenges of relationships and the, often, hilarious power of love.

The unifying theme of same-­sex marriage gives this collection its strong identity. The individual plays don’t share the same perspective or speak in the same voice. Which keeps things interesting.” – Variety.