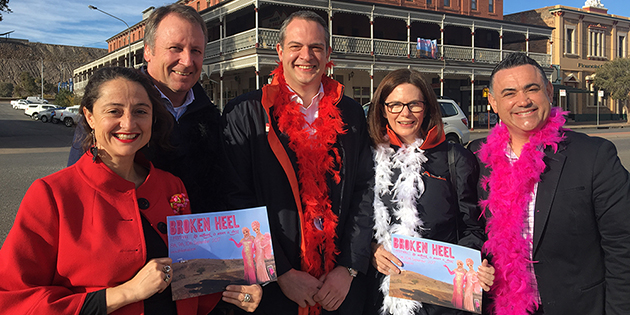 Kevin Humphries said the train will give festival goers the chance to start the party early as they make their way to the three day event from 8 September in western NSW. “The Broken Heel Festival is becoming an iconic event in regional NSW and it now has its own very unique train journey to get people there,” said Mr Humphries.

“We’ve seen how the Elvis Express is helping bring the world’s attention to regional New South Wales in January and we are hoping the NSW TrainLink Silver City Stiletto will be a similar success. Festival goers will be able to enjoy the beautiful sights of regional New South Wales, partly tracing the well-known journey across the outback in the movie Priscilla Queen of the Desert.”

“Since the Festival began in 2015 as a 21st birthday celebration of the film, the Broken Heel Festival has now become an annual event with people from all over Australia converging on Broken Hill in a major boost for the local economy and tourism.”

Deputy Premier and Minister for Regional NSW, John Barilaro, said the train is the perfect addition to a unique festival experience in regional NSW. “The NSW TrainLink Silver City Stiletto will be a dedicated three car XPLORER train, departing on Thursday 7 September and customers can return from the festival by train on Tuesday 12 September or other NSW TrainLink train or coach services, after the event,” said Mr Barilaro. “There are 145 tickets for the NSW TrainLink Silver City Stiletto and it is sure to sell out quickly.”

The Broken Heel Festival offers all of the authentic favourite haunts from the film and features drag queens and drag kings, plus entertainers bringing cabaret, comedy, opera and live music, including an Abba cover band. The Priscilla Bus from the multi-million dollar stage show will make an appearance, as the fabulous festival hosts Philmah Bocks & Art Simone will ensure there is never a dull moment.

There will be a farewell event before the NSW TrainLink Silver City Stiletto departs Sydney’s Central Station and customers will also be able to board the train at Strathfield, Penrith and Orange. As well as entertainment at Central before the train departs, well known drag queen Maude Boate will be on board for the journey, helping festival goers get into the mood on the journey to Broken Heel.