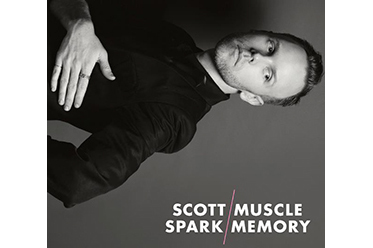 Four years after his debut album Fail Like You Mean It, Scott Spark is back with his sophomore album Muscle Memory featuring the single Two Alarms.

Scott Spark is an award-winning Australian singer songwriter. He sings about strategies for outsmarting death, love, wanderlust at Christmastime and life’s variety of screw-ups, while plinking the keys of anything that has them.

Premiering during his recent performance at TEDx Sydney, the first song from the new album, Two Alarms features an amazing video clip (featuring the cutest wake-up call you’ll ever get, designed by Australian cartoonist and illustrator Oslo Davis) and an exclusive phone app (Apple and Android) which is available now, allowing you to turn your phone into a bespoke Scott Spark alarm clock.

After Scott released his debut album Fail Like You Mean It (2010), mixed by Tucker Martine (Laura Veirs, Sufjan Stevens, The Decemberists, R.E.M., Spoon), he toured with Megan Washington, Tim Rogers and found the album in several Best of the Year lists. Soon after, he won the prestigious Grant McLennan Memorial Fellowship, enabling him to write Muscle Memory between Brisbane’s summertime floods and New York’s fall.

“2011 was a tumultuous year in so many ways,” says Scott. “Queensland’s floods, London’s riots, the Arab Spring and Occupy Wall Street. And, it was a tumultuous time for the people in these songs too.”

In New York, Scott composed the songs in odd spots: a school for talented teenagers in Manhattan; the Jewish Kaufmann Centre on Broadway; a conservatory for children in Brooklyn. By autumn, he’d written an album that was panoramic in scope, but intimate in its examination of human relationships.

“Muscle Memory is about the tension between wanting to belong and wanting to escape, and how that defines all our relationships and motives,” says Scott. “It’s about how love twists and turns – from uncomplicated to complicated, and back again – so easily.”

Muscle Memory was recorded in Los Angeles with US- based Australian engineer and sound producer Ben Tolliday, who has worked on productions with Alanis Morrisette, Wolfmother, the London Symphony Orchestra and Guy Sigsworth (Björk).

The result is Muscle Memory – a gut-punching emotional wallop of an album, driven by old-world piano and strings, but set to the backdrop of living history. For more information, visit: www.scottspark.com for details.