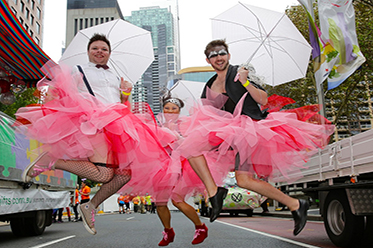 SBS have announced it has secured the Australian television broadcast rights to the 36th annual Sydney Gay and Lesbian Mardi Gras, to air exclusively on SBS 2 in March 2014.

A global beacon of pride and inclusion, Sydney Gay and Lesbian Mardi Gras is one of the world’s largest and most-loved LGBTQI celebrations, providing an opportunity to commemorate a universal message of diversity and equal rights.

“In bringing this year’s event free-to-air to all Australians, SBS is delivering on its purpose to encourage all Australians to understand, appreciate and celebrate diversity and in doing so, contributing to social cohesion.”

“SBS strives to act as a catalyst to encourage national conversations about social inclusion and we’re thrilled to have Mardi Gras as part of our programming line-up for 2014.”

Hosts for the SBS 2 broadcast and more details on SBS programming around the event will be announced in the coming weeks.