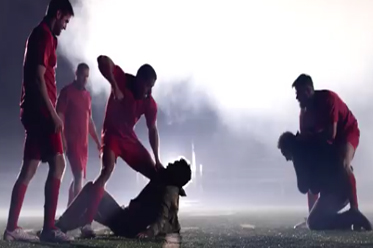 Set to the music of King Arivel, the metaphor of a rugby team brutalizing a gay couple represents the horrendous climate for LGBT people not just in Russia, but in other parts of the world as well, including Uganda, Belize, Saudi Arabia, Iran, and the other 76 nations around the world where being gay is still a crime.

Released by The Fair Games Project, the two-minute spot features a happy same-sex couple holding hands on a sporting field, only to be beaten by a team of Russian bullies while an onlooking crowd cheers, celebrates, and offers high scores in unwavering approval.

The new Russia Freedom Fund was launched late last year in collaboration with the ILGA-Europe and Russian LGBT activists to draw global attention to the alarming treatment of LGBTs in Russia. Since its release a few days ago, the video has received more than 500,000 views on YouTube.