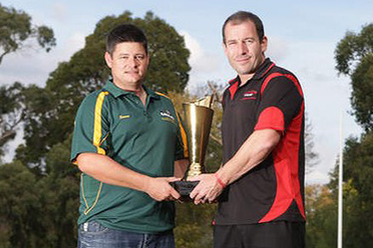 In a match that is set to establish a new precedent for inclusion in sport for the lesbian, gay, transgender, bisexual and intersex (LGBTI) communities, rival football teams Yarra Glen and Yarra Junction will unite to celebrate inclusion and diversity in the inaugural Pride Cup.

The AFL, which has implemented several policies and programs to tackle homophobia, is supporting the Pride Cup by hosting a pre-match luncheon to discuss diversity in sport, which will be attended by leaders from various sporting, human rights, mental health and LGBTI organisations.

Highlighting the leagues commitment to tackling homophobia and with the support of The Yarra Ranges Council, the Yarra Glen football oval will feature rainbows at the 50m lines at each end of the ground.

The inaugural Pride Cup will take place on Saturday 3 May at the Yarra Glen Football Ground, commencing at 2.10pm.