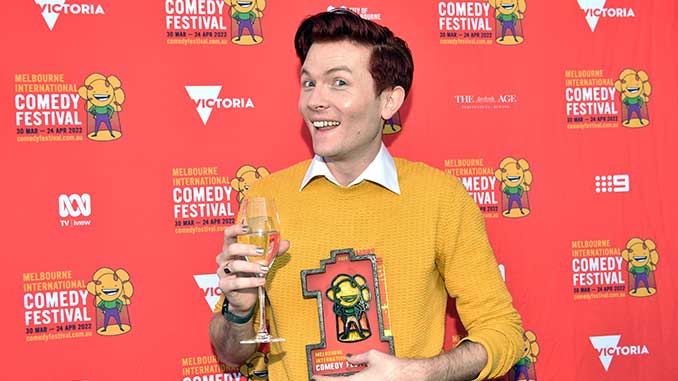 On the final Saturday of the 2022 Melbourne International Comedy Festival, the Australian comedy industry came together to celebrate the highlights of this year’s Festival.

After 25 days, hundreds of sold out shows, and despite the challenges that COVID posed, the Festival brought laughter back to the stages and crowds back to the streets of Melbourne with the average night-time activity near Town Hall measured at 99% of pre-COVID levels (*).

Hosted by Joel Creasey at Transit Rooftop Bar at Fed Square the nominees were joined by special guests and past winners including 2021 winner Geraldine Hickey, presenting the 2022 Award for Most Outstanding Show, Festival Director, Susan Provan AO who presented the Directors’ Choice Award, David Quirk presenting the Golden Gibbo and Greg Larsen presenting the Piece of Wood.

Nominees: Aaron Chen – If Weren’t Filmed, Nobody Would Believe | Cameron James – Electric Dreams | Danielle Walker – Nostalgia | Geraldine Quinn – Broad |Greg Larsen – We All Have Bloody Thoughts | Laura Davis – If This Is It

The Best Newcomer is awarded to a solo performer or group of performers doing their first Festival show.

For the most popular show of the Festival, as determined by the ticket buying public.

The Directors’ Choice is awarded by the Melbourne International Comedy Festival Director in consultation with festival programming colleagues to a show they think deserves to be celebrated was shared by two comedians at very different career stages.

The Golden Gibbo:
Winner: Alex Hines – To Schapelle And Back

The Golden Gibbo is awarded in memory of the late, great Lynda Gibson to a local, independent show that pursues the artists’ idea more than it pursues commercial gain.

The Pinder Prize honours Festival co-founder John Pinder, and supporting a performer to travel to the Edinburgh Festival Fringe.

The Piece of Wood is the comics’ choice award, selected by past winners and presented to a peer literally for “doin’ good stuff ‘n’ that”.

The Festival greatly acknowledges the Victorian Government through Creative Victoria and Visit Victoria, for their support, which was instrumental in bringing this much-loved Festival back to Melbourne at significant scale and encouraging audiences out and back to live events.