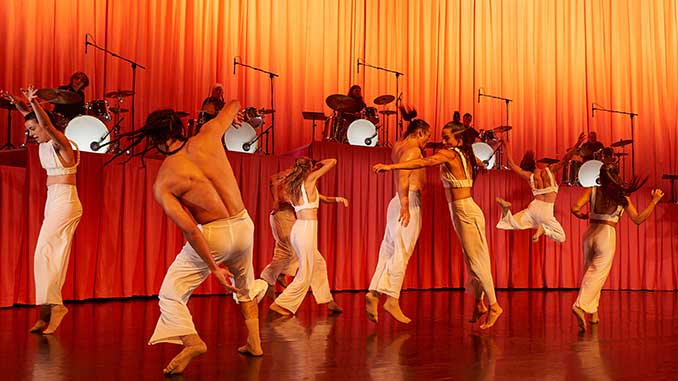 The set, a tiered semicircle of rising platforms draped in geranium pink, seems straight out of a Busby Berkeley musical. The effect is reiterated in the black and white costumes, with their art deco shell designs, navy-white pants and black suspenders. But the nine drummers perched with their drum kits on those platforms tell a different story, a more subversive and anarchic one.

The nine dancers are also arranged in a semicircle, sitting on chairs and facing us with a breezy nonchalance that belies the intensity that follows. Suddenly the drummers strike a beat and the dancers react, in poses that suggest fear and foreboding. Manifesto snaps to attention, and for the next hour barely pauses for breath.

After many years as a dancer, notably for Chunky Move and Lucy Guerin Inc, Stephanie Lake emerged a decade ago as one of this country’s most formidable choreographic talents. She melds a bold artistic vision with a meticulous, almost laser-like focus on craft, so that her work is both conceptually striking and intellectually rigorous.

She reached a creative milestone in 2018 with Colossus – an unforgettable work that continues to astonish audiences around the world, having recently played in Paris and Germany – and if Manifesto is not quite as brilliant, it is certainly tinged with genius.

Those loud, insistent drum beats that open the show, as the dancers hold increasingly pained and defensive poses, introduce a key element to the production: the commandeering authority of a military tattoo. Severe, inflexible and mighty.

It makes martinets of the drummers and turns the dancers into marionettes, an image made literal at one point when a solo dancer seems not only pulled by invisible strings, but tangled disastrously in them. There is a jittery, obsessive anxiety about much of the early movement, as dancers clutch at their skin, or force with closed fists some malignancy that starts in the diaphragm and pushes up into the oesophagus.

Gradually, this mood shifts and the dancers loosen their shackles somewhat. That consternation doesn’t entirely disappear, but it morphs into freer and more fearless outbreaks of athleticism and prowess. The dancers’ relationships with each other, and with the drummers perched above them, changes; not so much cowered as emboldened by the musicians, a sense of community and solidarity breaks through.

This becomes the predominant mode, one of defiance and even joy. There is a tangible convocation of energies at work, as if the dancers were conjuring some primordial spirit, one of optimism and renewal.

Lake is masterful at structure and pacing, and she is daring enough to subvert our expectations of where and when a particular sequence might land. One section has an almost orgiastic rise to climax, and would lean into catharsis if it weren’t for the fact that it occurs around the half-way point. It is followed by a superbly intimate, zen-like exploration of bodies in harmony, of the privacy of close bonds.

The music, too, having reached an apotheosis of explosive intensity, mellows into something gentle and calming, beautifully illustrating the textural range of the percussion, not to mention the extraordinary skill and precision of the musicians. This shift in the middle would be curious if it weren’t so considered and moving.

As with Colossus, the technical elements in Manifesto combine to stunning effect. Robin Fox’s music is absolutely central here, harnessing the power of the drummers in driving reverberations, thumping beats and delicately sonorous bells, evocative of both ancient rituals and wild raves.

That one sequence of ecstasy mentioned earlier – when the nine drummers parcel out a single, sustained drum solo and the dancers let loose with pounding synchronised group work – is so exhilarating it borders on the liturgical.

Paula Levis’s costumes, either smartly formal or sensual and lacy, are gorgeous and practical (no mean feat) and Bosco Shaw’s lighting is wonderfully daring and dynamic, emphasising the work’s showmanship, that nod back to Berkeley.

There is a maturation and synthesis occurring in Lake’s work, a sense of an artist digging deeper on the one hand and expanding outwards on the other. Her unique choreographic style is by now fully realised – her interest in chain reactions, in the strange unbidden jerkiness of limbs, in the frightening and electrifying power of groups – but it isn’t fixed or self-referential.

Manifesto contains many moments of pure lyricism, an embrace of form and line usually associated with traditional ballet, but it’s also searingly contemporary. The dancers, their athleticism and their passion, are magnificent in all modes, and what is manifested here is euphoric and memorable. Another hit. Another palpable hit.