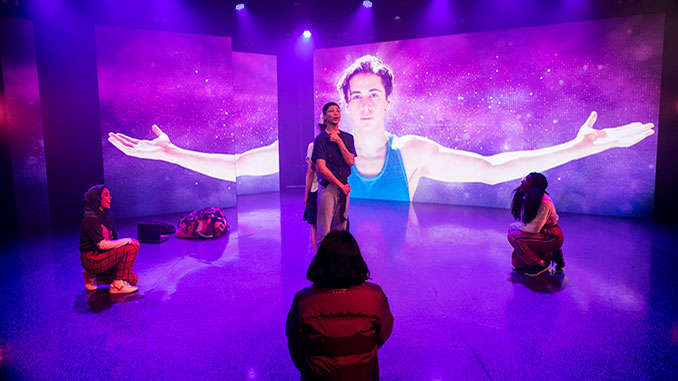 Fangirls is undeniably one of the most perfectly crafted Australian works to hit the stage. Period!

From the very first moment to the very last – Fangirls absolutely delivers a joyful production of pure serotonin. With a sublime mix of comedy and drama, the production portrays a triumphant pastiche of the light and dark of adolescents.

Yve Blake nails it. She has written a work that is both fantasy and reality, desire and heartbreak, hopeful yet cynical. Not a moment of the script is wasted, with each word and sentence further peeling back the layers of obsessive fan culture and exposing the sometimes insidious but often comfortingly inclusive world underneath.

Karis Oka leads a genuinely likable cast of characters – each respectfully unique and delightfully complex. Oka’s portrayal of Edna is so damn brilliant that you are fully behind her from the start and only ever want to see her succeed. Oka’s performance never wavers, even during the shifts to darker themes, pivots with all the ease and grace of an experienced performer.

The ensemble of AYDAN, Danielle Barnes, Chika Ikogwe, Shubshri Kandiah, Ayesha Madon, James Majoos, Sharon Millerchip and Tomáš Kantor are a force to be reckoned with. A powerhouse of talent, they duck and weave through a multitude of characters – from fellow Fangirls, to internet besties, news anchors and many, many more. The level of talent together on the stage is explosive, with each performer giving it their all.

Paige Rattray’s direction is faultless and fun – moving the story from setting to setting, moment to moment with fantastical glee. Rattray smashes down the fourth wall, allowing the ensemble room to be cheeky and mischievous. The pacing is on point, the tonal shifts on stage are subtle, with the end result absolutely displaying someone who is at the top of their game.

The design of the work is impeccable – from the set to the lighting to the audio visual elements, everything works to serve the story and elevate the world into a fantastic wonderland. Initially the staging seems stripped back and simple but soon a world of colour and spectacle unfolds with dazzling delight.

Fangirls is a must – not just a must see but a must in terms of the work that should be on Australian stages. Inspiring, emotional, relevant and engaging, this is definitely one you want to see with your best besties.