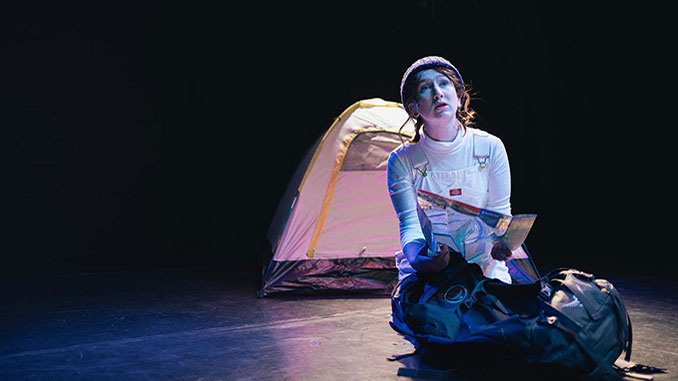 The Inuit don’t have A Hundred Words for Snow and never have. It’s one of those made-up facts that sounds good, so it’s believed. People will believe anything, like there is only one North Pole or only one type of white.

Rory’s dad liked fun facts – real ones. Rory is 15. She never liked being called Aurora because she never felt like a princess. She liked exploring with her dad even if it was embarrassing that he was the geography teacher at her school.

After he dies in an accident, she finds his notebook with his plans to travel with her to the North Pole. So, she takes his urn of ashes, her tent and her mum’s credit card and heads north.

Tatty Hennessy is a UK playwright and screen writer. Her A Hundred Words for Snow was a winner of the inaugural Heretic Voices Monologue Competition for best new writing in monologue in 2017 and the original production was nominated for three Offies, the London off–West End indie theatre awards.

It’s a coming-of-age story and road story that embraces clichés of both while remaining fresh and surprisingly original.

Rory talks directly to the audience as she discovers the point where this story begins. On the way, she experiences the type of freedom that lets her escape from being Rory, has first sex – in one of the most delightfully honest and authentic descriptions of first sex – and finds her way to being so close to the North Pole that she can name the explorers who died before they got as near as she was.

Eddie Pattison performs Rory like it was written for them. Pattison studied acting at VCA and has been in independent productions.­­­­

Guided by director, and producer, Gavin Roach, they find a connection to Rory that feels personal as they explore the story that’s as much about grief as it is about parental relationships, gender expectations and accepting help and support.

Hennessy had travelled to the Arctic and her descriptions of snow, colours she’d never seen before and the beginnings of frostbite are so vivid that it’s a good idea to bring a scarf. It’s made more visceral by the Connor Ross’s sound and Spencer Herd’s lighting.

So much so that if anyone tells you that they saw a polar bear in the warm darkness of a warehouse in St Kilda, it might be a fact.