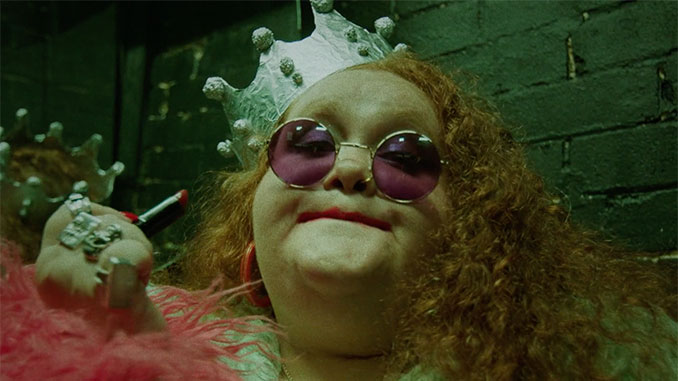 On 17 March 2020, the Old Fitzroy Theatre went dark. Now, one year and a day later, Red Line Productions will turn on the lights once again for a year of spectacular and exciting theatre.

The first production of 2021 explodes the space with electricity and life once more with a new interpretation of Eugene Ionesco’s classic absurdist comedy Exit The King. Directed by Megan Wilding and starring Jonny Hawkins, Shakira Clanton, Dalara Williams, Toby Blome, Emma O’Sullivan and Rob Johnson, this production promises to be a boldly adventurous, hilariously irreverent, and dangerously, politically charged night out.

Among the many other season highlights, Samuel Beckett’s firebrand text Happy Days, at his existentially hilarious and ironic best, will be brought to life by luminary of stage and screen Belinda Giblin under the direction of Craig Baldwin in the intimacy of the Fitz, as well as Sarah Kane’s brilliant and uncompromising Cleansed in a radical and moving new reinterpretation of this work directed by Dino Dimitriadis.

Also featuring is the outrageously hilarious Broadway hit Hand To God. Directed by Alexander Berlage, this madcap comedy explores the startlingly fragile nature of faith, morality, and the ties that bind us and is guaranteed to leave you sore with laughter.

In 2020 Red Line innovated in the face of the global pandemic to become world leaders in presenting live-streamed theatre readings and live-streamed theatre seasons across the world. Close to 20,000 people tuned in live streamed performances featuring Alec Baldwin, Rose Byrne, Ewen Leslie and John Butler among others.

“To be at the point we are now with commercial projects in full swing and the Fitz having Cat, Con & Alex taking the Artistic Director reigns I have never been more certain of Red Line establishing itself as a sustainable Australian business,” said Red Line Creative Director, Andrew Henry.

Twelve productions will burst to life on the legendary Old Fitz stage during 2021 and into 2022 – details of each production are below. For more information and full program, visit: www.redlineproductions.com.au for details.

EXIT THE KING
Written by Eugene Ionesco
Season: 18 March – 10 April
Produced by Red Line Productions
King Berrenger has been in power for hundreds of years. His kingdom is crumbling all around him: there’s lightning stuck in the sky, the clouds are raining frogs, the sun doesn’t listen to him, and not to mention there’s a huge bloody crack in the wall. Yet despite all these warning signs, the stubborn monarch refuses to abdicate! Not even certain imminent death can convince the crown he’s no longer good for the job. But this will not do, Queen Marguerite knows that if the country is to be saved the king must die. There is no other way.

GODDESS – THE ELIZABETH BURTON STORY
Devised and performed by Elizabeth Burton with collaboration by Betty Grumble & Aaron Manhattan
Season: 4 – 8 May
Presented by Performing Lines & Red Line Productions
Goddess is a tapestry of the life of the veteran striptease artiste and certified legend of Kings Cross, Elizabeth Burton. Burton tells her story of life on Sydney’s Golden Mile and abroad, as she casts her memories and dreams, grit and glamour, radical pleasure and goddess energy across the stage.

HYPERDREAM
Created by Adriane Daff and Mikala Westall with Nat Jobe, Angela Mahlatjie and Josh Price
Season: 13 May – 5 June
Produced in association with The Last Great Hunt & Red Line Productions
If you could re-do a moment in your life, a moment whose memory haunts you, turns you beet red out of nowhere in the supermarket, still has you screaming one-sided conversations in the shower… would you do it? A group of tormented people decide to delve into the dark conflict of their psyches to make things right. They’ve done the work, they’ve paid the premium, but will it be enough? Will it make them feel better? Hyperdream is a journey through obsessions, coping mechanisms and our understanding of reality.

HAPPY DAYS
Written by Samuel Beckett
Season: 10 June – 3 July
Presented by Red Line Productions
The world seems to be ending. Every day, Winnie wakes up buried to the waist in a burnt-out post-apocalyptic wasteland, with nothing but the contents of her purse. To top it all off, her husband, Willie, has stopped talking to her. What is one to do in such isolation but get on with it? Beckett’s absurdly funny, existential masterpiece takes on searing of-the-moment resonance in this strikingly intimate production directed by Craig Baldwin (The Aliens, John) featuring a hilarious and heart-breaking performance from Old Fitz favourite Belinda Giblin (Doubt, Home and Away).

VOLCANOES AND VULVAS: The Exploration of My Two Greatest Love
Written by Cheryn Frost
Season: 6 – 10 July
A queer love story between a woman and Mother Earth as a volcanologist takes her first step to reach the opening of the vulva-cano. An experimental performance piece exploring the intersections and parallels of Mother Earth in relation to human behaviour and focussing on natural disasters, climate change and the human body as a site of expression.

CLEANSED
Written by Sarah Kane
Season: 15 July – 7 August
Presented by Apocalypse & Red Line Productions
In an institution designed to rid society of its ‘undesirables’, a group of inmates try to save themselves through love. Director Dino Dimitriadis (Angels in America, Metamorphoses) reimagines the intimate, harrowing and uncomfortably beautiful world of Sarah Kane’s most brutal work.

HAND TO GOD
Written by Robert Askins
Season: 12 August – 11 September
Presented by Red Line Productions In the tiny, conservative town of Cypress, Texas, the shy, mild-mannered Jason is just trying to be a good son. When he joins his mother Margery’s Christian Puppet Ministry at the local church, Jason discovers a burgeoning talent for puppetry, and after his father’s sudden death it seems like things might just turn out okay. Tyrone the puppet, though, has other plans. As the foul-mouthed, independent, and devilishly funny Tyrone grows in strength, Jason’s complex relationships with the school bully, the girl-next-door, and most importantly, his mother, are thrown into upheaval. An irreverent, occasionally shocking, and perpetually hysterical romp to hell and back, from the award-winning director of Young Frankenstein and American Psycho, Alexander Berlage.

TRUST
Written by Falk Richter
Season: 16 September – 9 October
A break-up. A break down. An explosion. A confession. An acid trip. A dream. A frank conversation. Against a backdrop of capitalism in crisis, a kaleidoscope of intimate human relationships emerges. In this anarchic post-dramatic collage directed by Carissa Licciardello (A Room of One’s Own), the personal and political, the tender and fraught collapse into one another in a bold theatrical refraction of our bizarre modern world. It’s love and sex and car-keys amidst the chaos and crisis.

ATE LOVIA
Written by Jordan Shea
Season: 14 October – 6 November
Presented by kwento & Red Line Productions
Life seems to be looking up for the Ejercito family in 1996 despite an arrival of a new boom of conservatism, spearheaded by John Howard and Pauline Hanson. A new job, a new role in an ultra-fabulous amateur production of a Broadway classic and falling in love for nineteen-year-old Lovia, her younger, theatrical brother Vergel and their disenfranchised father, Jovy, who has long descended into alcoholism, frequently passes out under the Hills Hoist. The return of an estranged presence rocks the lives of the Ejercito family to the very core. Ate Lovia is a new Filipino-Australian drama, that interrogates what it means to stay loyal to your family, no matter how brutal it gets.

BURN WITCH BURN
Written by Tasnim Hossain
Season: 11 November – 4 December
Presented by fervor & Red Line Productions
This devised piece inspired by the 1962 British horror film Burn Witch Burn and from a team led by director Claudia Osborn and writer Tasnim Hossain, what starts as a 1960s domestic drama descends into a wordless theatrical and dark feminist fantasia. Tansy is a witch. When her no-nonsense husband Norman discovers her powers, and burns all her charms, he realizes how little his success has to do with his talent. Without Tansy’s protections, the boundaries between reality and supernatural blur; salvage, sacrifice, nightmare, reverie, pleasure, pain. As Norman’s world descends into hallucinatory hell, Tansy teeters on the edge of ecstasy and evil.

THE MAHOGANY SONGSPIEL & THE SEVEN DEADLY SINS
By Kurt Weill, Bertolt Brecht, Elizabeth Hautpman
Translation by Michael Feingold
Season: 9 December – 15 January
Presented by Red Line Productions
Constantine Costi presents a Kurt Weill Double Bill. The Fitz has always been a space where anything is possible, and for the first time it will be home to a debauched operatic spectacle of cantata, dance, and theatrical mayhem. The Mahogany Songspiel (Weill/Hauptmann/Brecht) is a manic celebration of the fall of a fictitious city, Mahogany, whose gold façade is nothing but a cover for nausea, vice, and despair. The Seven Deadly Sins (Weill/Brecht) sees two sisters hustling their way across America. They will charm and swindle to make ends meet in any way they can to survive.