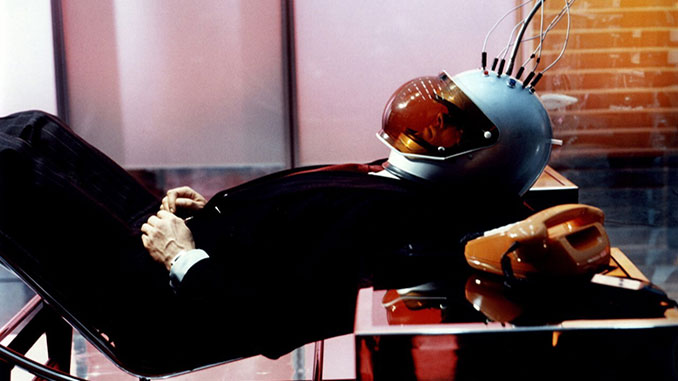 Presenting a visually and ideologically striking view of technologies past, present and future, Rainer Werner Fassbinder’s dystopian epic, World on a Wire, will be shown in a special one-off screening at ACMI on Saturday 20 March 2021.

After the mysterious death of the Technical Director of an even more mysterious computer simulation experience in development, Fred Stiller (Klaus Löwitsch) steps into the newly vacant role.

Almost immediately, he’s plunged into a surreal world where colleagues disappear without a trace, A.I. has agency and the line between reality and fantasy is dangerously blurred.

On one hand, World on a Wire is an anomaly in Fassbinder’s oeuvre, marking the only time he directed science-fiction. On the other hand, he frequently worked in television, almost as much as for the cinematic career he is renowned for.

At a time when computers were super – and virtual reality was in its infancy as “experience theatre” – Daniel F. Galouye’s 1964 sci-fi novel and Fassbinder’s subsequent mini-series offer a strikingly accurate view of technology and our related anxieties well ahead of their time.

His surreal dreamscapes are much more decadently staged with his signature stylistic excesses, perhaps befitting our everyday pursuit of leisure without fear (or with indifferent fear) of the ethical and philosophical fallout.

This 1973 blockbuster from one of cinema’s greatest queer icons is a work ripe for rediscovery.