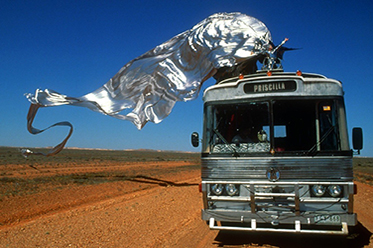 The National Film and Sound Archive of Australia (NFSA) has launched its first online exhibition, Priscilla: 20 Years Young – to celebrate the 20th anniversary of the Australian road movie The Adventures of Priscilla, Queen of the Desert.

“We’re very excited to launch our first online exhibition. Priscilla: 20 Years Young represents a new way to share our collection with audiences across Australia and around the world, to ensure that the NFSA is truly a ‘living’ archive for everyone,” says NFSA CEO Michael Loebenstein.

“Digitisation of our collections, including documents and artefacts such as the Priscilla costumes and scripts, is essential to ensure that Australia’s audiovisual culture and memory is permanently available to audiences. We will continue to explore innovative ways to provide the best virtual experiences possible, and provide access to the two million stories we preserve at the NFSA.”

Showcasing a selection of the film’s documents and artefacts preserved in the NFSA national audio-visual collection, the exhibition provides an insight into the world of Priscilla, and uncovers fascinating facts about its production.

For example, did you know that Priscilla was originally going to feature Kylie Minogue’s early hits, instead of ABBA? Although the soundtrack became a bestseller with its mix of iconic disco songs – and playing an important role in the early 1990s ABBA revival – the original concept for the film was a Stock/Aitken Waterman jukebox musical, featuring the hits of Kylie Minogue, Rick Astley, Bananarama and Jason Donovan!

The performers were expected to have cameo appearances in the film, and Minogue was even was considered to play the wife of Hugo Weaving’s character – that role ultimately went to Sarah Chadwick.

In one of the documents available in the exhibition, director Stephan Elliott said that “‘the structure is safe, the subject is not […] The film could achieve monumental success within the film going gay market alone. If the magic spreads to the general public, the sky is the limit!”

Elliott would be proven right; following the film’s premiere at the 1994 Cannes Film Festival, it become one of Australia’s favourite features, and it has also inspired a successful stage show and a reality TV series.

In the online exhibition, audiences will be able to:

Priscilla: 20 Years Young would not have been possible without the generous support of Executive Producer Rebel Penfold-Russell, and Tim Chappel. For more information, visit the NFSA website for details.

Image: Production still from The Adventures of Priscilla, Queen of the Desert