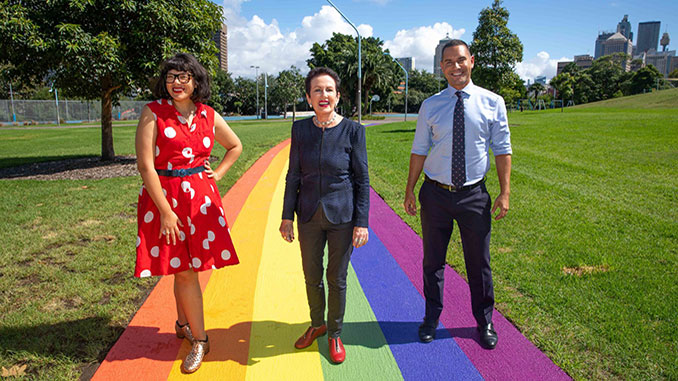 A footpath winding through Sydney’s Prince Alfred Park has been banded with the colours of the rainbow in the city’s latest move to support equality, diversity and inclusivity.

The 90m path runs alongside Equality Green – the area of the park recently renamed to commemorate the moment tens of thousands of Australians gathered in 2017 to hear the outcome of the same-sex marriage vote.

“The path represents the progress we’ve made towards equality and the long way to go before our LGBTIQ communities are free of discrimination,” said Lord Mayor Clover Moore.

The Surry Hills Creative Precinct proposed the idea of a rainbow path in 2019 to reflect the area’s position at the vanguard of diversity and inclusivity.

“I thought it was a fabulous idea when the precinct suggested we paint a bright rainbow on Equality Green,” said the Lord Mayor.

“This is a permanent tribute to the moment when more than 30,000 Sydneysiders gathered together to hear the results of the marriage equality postal survey on 15 November 2017.”

The rainbow path’s installation follows the reinstatement of Darlinghurst’s rainbow crossing at the corner of Bourke and Campbell streets 2 years ago this month – a popular tribute to the area’s close links with LGBTIQ communities.