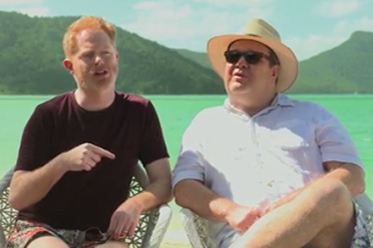 The Modern Family stars who play gay couple, Mitch and Cam, have issued a timely reminder to Australians that the world is waiting for Australia to pass marriage equality.

In a video clip released by Australian Marriage Equality and filmed at the Great Barrier Reef, Jesse Tyler Ferguson and Eric Stonestreet are astonished that Australia wouldn’t allow their respective Modern Family characters Mitchell Pritchett and Cameron Tucker to marry. At the end of the video they decide to head to New Zealand where same-sex marriage is legal.

“This is a funny video with the serious message that the right of loving same-sex couples to marry is becoming a defining difference between Australia and similar western countries like New Zealand,” says Australian Marriage Equality National Director, Rodney Croome.

“We thank Jesse Tyler Ferguson and Eric Stonestreet for taking the time to make a video that will inspire many Australians to stop waiting and get involved in the marriage equality campaign.”

“We also thank Jesse Tyler Ferguson for his $10,000 donation to Australian Marriage Equality which will go towards our grassroots campaign in the 50 electorates whose MPs will decide if marriage equality passes.”

Mr Croome said this weekend’s elections in South Australia and Tasmania provide an opportunity for marriage equality supporters to vote for candidates who support the reform across all parties.

“In recent days, pro-marriage equality Liberal and National Party candidates have joined Labor and Green candidates who already support the reform. This is reminder that marriage equality is not a left / right issue, and it provides voters across the political spectrum with an opportunity to vote for the reform.”

“From state elections to one of the world’s most popular TV shows, the momentum for marriage equality will only continue to grow as we wait for the Prime Minister to grant a free vote to his Party.”