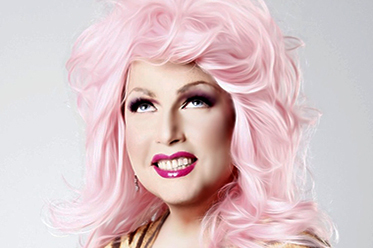 Disco Diva Miz Ima Starr unleashes her debut album My Heart’s A Drummer with a flurry of singles, music videos, showcases, and a brand new cabaret show this February!

As lovers of cabaret know, Starr got her start in Aotearoa, with a string of stage shows, TV & film cameos, and concert appearances throughout the 90’s. So when the time came to create the bedazzled collection of 100% original songs that feature on My Heart’s A Drummer, this adopted Australian headed straight to Kiwi producers and long-time musical collaborators The Sound Room – and the result is dance-floor-filling pop/rock from start to finish.

“I’ve been working out the new music on audiences for the last year, as the songs began to pile up. Tracks have found their way into my cabaret and nightclub shows – and been previewed at mass community events like Big Gay Out and Mardi Gras Fair Day,” says Starr.

The album reflects a kaleidoscope of musical influences from glam rock to early-90′s pop-techno, to art rock of the 70s and 80s. The lead single from My Heart’s A Drummer is the title track, accompanied by a modern-gothic mini-horror-film music video from Sydney-based director Heidi Lee Douglas, released to coincide with World Women in Horror Month. The album is supported with radio remixes of key tracks by Melbourne’s DJ Argonaut and hot kiwi producer Kings.

Her debut 2002 release Pop Object was reviewed as “pure pop genius” by DNA Magazine, and featured her pure Kiwi hit Trippin, a remake with Baitercell of the 90’s rock classic by PUSHPUSH. The song was on the soundtrack for the cult film I’ll Make You Happy, and was released on the official soundtrack album by legendary record label Flying Nun Records.

Miz Ima Starr was constructed out of glitter, sweat and second-hand cosmetics by Charles Bracewell (a mainstay of NZ college radio in the 90’s as co-host of In The Pink) in 1991 and has split her time between TV and the cabaret stage ever since. She stunned Australian TV audiences with three memorable appearances on the first series of hit show Australia’s Got Talent, and in 2011 co-hosted her own interview chat show Beauty & The Bear on Foxtel.

As her fans will know, the heart of Miz Ima Starr’s artistic work is cabaret, having toured eight shows throughout Australasia across two decades to great acclaim – most recently adding a ninth show If Life Gives You Lemons to her repertoire with seasons at Tasmania’s Festival of Voices and TasPride Festival in 2013.

The next step in her onstage journey is the development of a new Miz Ima Starr cabaret to showcase My Heart’s A Drummer that will be toured to festivals throughout 2014.

“The show focuses on my long and winding road through pop music – from vinyl tragic, to cover artist, to singer/songwriter. I’m thrilled to introduce My Heart’s A Drummer the cabaret show on Sunday 16 March in Hobart at the Spiegeltent – I can’t wait to finally bust my Spiegeltent Cherry!” says Starr.

But before Miz Ima Starr scandalizes Tasmania, she has a date with audiences at Mardi Gras – as a special guest of a showcase in honour of Sydney legend Claire De Lune at Slide on Thursday 27 February. For more information, visit: www.slide.com.au for details.