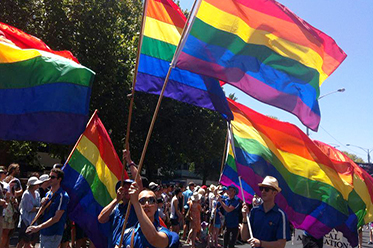 More than 30,000 people braved the heat on Sunday 2 February to witness the running of the 19th Pride March down Fitzroy Street, St. Kilda, that featured more than 100 groups and 4500 participants.

Following the roar of the Dykes on Bikes, the march was lead by the City of Port Phillip wh0 are the principal supporter of the event. Crowd favourites, the Victoria Police was lead by their Chief Commissioner, Ken Lay – who was marching for the first time since becoming Commissioner.

The diversity of Melbourne’s GLBTIQ Community was firmly on display with groups including the Melbourne Rainbow Band, the Vic Bears, Melbourne Chargers Rugby Union Football Club, Midsumma Festival, Performing Older Women’s Circus and The Gay and Lesbian Organisation of Business and Enterprise (GLOBE). The march also saw the launch of the Australian Equality Party – a new voice for LGBTI communities in Australian politics.

AFL footballer, Brock McLean led the Athlete Ally contingent along with several other AFL players including Sam Gilbert and Jarryn Geary, as well as openly gay amateur footballer Jason Ball with his teammates from the Yarra Glen Football Netball Club.

Prior to the March, guests attending the Brunch with Pride fundraiser at the Hotel Urban heard from Christine Forster, the sister of Prime Minister Tony Abbot and City of City Councillor, who encouraged the community, regardless of their ‘political colour’ to engage with your local Member about Marriage Equality.

Despite the heat, many partied on at the post-march activities in Catani Gardens supported by the St. Kilda Tourism Association.  The annual Pride March was the closing event of the 2014 Midsumma Festival.