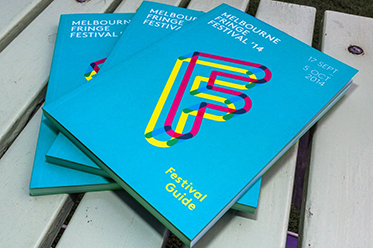 Melbourne’s longest running and most popular independent arts festival takes over Melbourne this September, with over 5000 artists from Victoria and Australia’s diverse arts scene, showcasing new work in hundreds of venues across the city.

Presenting a dynamic range of artists, the Festival showcases the creative life of the city by bringing together a community like no other. From emerging artists presenting for the first time, to established Fringe Festival favourites such as Arj Barker, Rod Quantock, Finucane & Smith, and Die Roten Punkte, this years’ Fringe is the biggest event in the cultural calendar with over 400 individual shows over 19 days.

North Melbourne plays home to the Fringe Hub across ten energy-­filled venues. The Festival then spreads out into Melbourne’s vibrant suburbs, featuring a program of the very best and latest acts across a range of artforms, including comedy, music, theatre, circus, dance, design and visual art. It’s a unique way to the see the city, with something for everyone and a chance to be a part of something huge.

This year, Melbourne Fringe presents Uncommon Places, exploring the concept of the ‘Third  Place’ – a place where people gather, converse, catch-­up and hang out. Third Places are informal sites that foster civic engagement, political thought, multicultural vibrancy and a sense of belonging.

In partnership with the City of Melbourne, ten emerging artists have been commissioned to create new works that celebrate these places, including the Flinders Street Station tram stop, Pellegrini’s, City Baths, Cinema Nova, City Library and Swanston Street, among others. These locations are brought together by the Common Room, Melbourne Fringe’s very own temporary Third Place located in City Square.

Other highlights include: the open access Fringe Film: Digital Creatures – presenting the finest and most imaginative new work from the worlds of film, digital video, animation and art to Melbourne audiences at Little Creatures Dining Hall in Fitzroy; and the much-loved Fringe Furniture returns showcasing the latest in furniture, object and interior design, presented again this year at the Abbotsford Convent. This year artists have been invited to respond to the theme, Living Traces.

The Fringe Hub in North Melbourne, offering a curated selection of works from the program, special themed events and late night dancing. No night is ever the same, and many events are free.

The 2014 Melbourne Fringe Festival runs 17 September to 5 October. For more information and the full program, visit: www.melbournefringe.com.au for details.