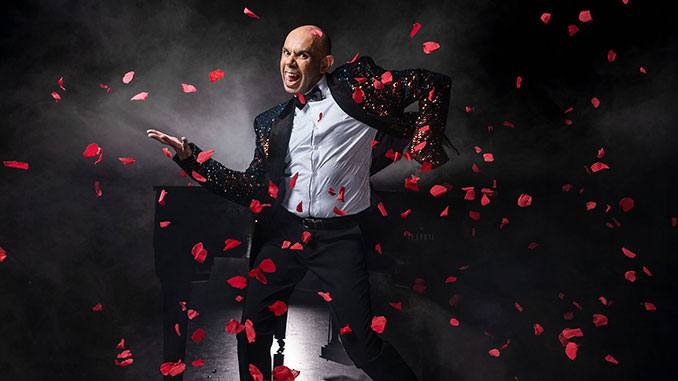 With 200 performances across 23 nights on five stages, Comedy Festival at Malthouse in 2022 promises to be one huge hub of laughs. Highlights include Reuben Kaye, Morgana O’Reilly, Steven Oliver, The Travelling Sisters, Jason Leong and Clare Bartholomew & Daniel Tobias in The Anniversary.

Running from 31 March to 24 April 2022, The Malthouse comedy hub has proven a favourite with Melbourne International Comedy Festival audiences in past years, with indoor and outdoor food and beverages offerings, a joyous atmosphere and an average ticket price of only $24.50.

Steven Oliver from ABC TV’s Black Comedy and Faboriginal on SBS TV presents a solo show, Bigger and Blacker, while A Boy and his Deck is a coming of age story from unconventional magician and online sensation, Dom Chambers.

Staying on magic, The Disappearing Act is a onewoman show where Maria Angelico discovers the meaning of magic – in the not so magic world of magicians. Dani Cabs’ Keep It Up! is a mix of storytelling, clowning, dance and physical theatre, and there is turbo-charged clowning from Melbourne comedian Lilly Fish in Jofus and the Plank.

The Anniversary is a physical comedy house party from hell from the creators of the multi-award-winning Otto & Astrid – Die Roten Punkte (Clare Bartholomew & Daniel Tobias), while Malaysia’s hottest comedy star Jason Leong is back at his favourite Comedy Festival with rants against nonvaxxing fools, misguided bicyclists, and the perils of parenting.

Bunny is a new show from comedian and theatremaker Barnie Duncan that explores the specific freedom a dancefloor at 3am can bring to a human, while physical comedy superstars The Travelling Sisters return as three blokes with a dream, and star of Neighbours, Wentworth and Housebound, Morgana O’Reilly presents a solo work, Stories About My Body.

“We’re thrilled to be hosting this incredible line-up of artists and for Malthouse to come alive with screams of laughter,” said Sarah Neal, Executive Director & Co-CEO of Malthouse Theatre.

Kungari Comedy
Playbox: 31 March – 24 April
Presented by Kimmie Lovegrove, Kungari Comedy brings you Victoria’s funniest Aboriginal and Torres Strait Islander comedians. They are all alumni from the MICF’s Deadly Funny program. Each act brings their own funny stories about their experiences of being Aboriginal and Torres Strait Islander in Australia.

Lilly Fish: Jofus and the Plank
Playbox: 31 March – 10 April
Turbo-charged clowning from Melbourne’s hottest new physical comedian. Meet Jofus: fast quipping, story spinning, absurd miming extraordinaire. Part Marcel Marceau, part Looney Tunes, and armed with nothing but a plank of wood. Life is going swimmingly for Jofus until one day there’s a knock at the front door. It’s the big bad wolf. Jofus leaps out the window and starts to fall. Like Alice tumbling down the rabbit hole, time stretches and a surreal adventure begins. A live action cartoon that melds clown, mime and theatre. For people who grew up on Robin Williams’ Genie, Saturday Disney and The Simpsons.

Dani Cabs: Keep It Up!
Tower: 12 – 24 April
Keep It Up! has been developed with the support of HOTA and Wesley Enoch. It is a mix of storytelling, clowning, dance and physical theatre. Using the work of Phoebe Waller-Bridge (Fleabag)
as inspiration, Dani Cabs wants to create a show that breaks down social barriers through play. Dani also aims to bring positive messages about community, love, empathy and equality to his audiences.

Barnie Duncan: Bunny
Tower: 31 March – 10 April
A new show from comedian and theatre-maker Barnie Duncan that explores the specific freedom a dancefloor at 3am can bring to a human. Made in the weeks following his mother’s death this
March, Barnie also uses the show to ask questions about grieving and whether or not he is dealing or escaping. This is Barnie at his most vulnerable yet, which makes the work all the more accessible to fans of his kooky characters and absurdist takes on the world.

The Travelling Sisters: Thy, Thus, Twas
Tower: 12 – 24 April
Physical comedy superstars The Travelling Sisters return as three blokes with a dream. Darryl, Vinnie and Berrick are self-proclaimed thespians with mullets and mummy issues. Balls deep in inspiration and with too much time on their hands, the boys join forces to create a theatrical masterpiece. Based out of their mother’s living rooms and facing a million distractions, the boys embark on a joyful journey of chaos and confusion. Opening night looms. Can they pull it off? This highly physical, fast-paced comedy of errors was nominated for Best Comedy at Melbourne Fringe 2019 and was the launching pad for the awardwinning web series Meet The Mullets in 2020. Created by Lucy Fox, Laura Trenerry, Ell Sachs and Kimberley Twiner.

The Anniversary
Beckett: 31 March – 17 April
You are cordially invited to Jim & Barb’s Golden Anniversary. The Anniversary is a physical comedy house party from hell! From the creators of the multi-award-winning Otto & Astrid – Die Roten Punkte comes a brand-new murderously funny comedy farce from Clare Bartholomew & Daniel Tobias, directed by Peter Houghton. Jim & Barb’s dreams for the perfect celebration of their love quickly fall away as they face the reality of a semicentury together.

Jason Leong: Heaty
Beckett: 31 March – 10 April
Dr Jason Leong rants against non-vaxxing fools, misguided bicyclists, the perils of parenting, his doctor wife becoming a heroine in the pandemic and oversexualized Brazilian Jiujitsu, all while growing older, wiser and having weakening knees. Malaysia’s hottest comedy star is back at his favourite comedy Festival, and hopes that Melbournians will actually let him in.

Morgana O’Reilly: Stories About My Body
Beckett: 19 – 24 April
Tales, scenes, diary excerpts, and boobs; Stories About My Body is a new solo work by the star of Neighbours, Wentworth and Housebound. “I’ll tell you my birth stories, how I sold my toes in New York, read you diary entrees from ’98, while trying to work through my constant love/ hate relationship with this body of mine.” Morgana explains she still has a love/hate relationship with her ‘mum bod’. However, doing full nudity in a film last year helped Morgana remember that ‘bare tits are ridiculously comical! There’s so much unmined comedy to be used with my own body’. Warning: There will be nudity, and you will love it.

Dom Chambers: A Boy and His Deck
Beckett: 19 – 24 April
Dom Chambers’ unconventional magic has made him an online sensation, garnered fans around the world, and landed him on a Broadway stage. A Boy and His Deck is his coming-of-age story. Playing cards, a mysterious underground legend, and an impossible quest for both approval and individuality – A Boy and His Deck is a hysterical glimpse into the life of an obsessed teenager trying to find his path as a magician. One thing is certain – you’ll never look at a deck of cards in the same way again.

Steven Oliver: Bigger and Blacker
Merlyn: 31 March – 10 April
“What’s this then sl*t?” You might know Steven Oliver from being sexy on ABC’s Black Comedy. Or perhaps from hosting Faboriginal on SBS. But his talents don’t end there; get ready for a bit of a rap, a bit of a sing, a bit of a tap and a lot of shaking his ring. Bigger and Blacker has been described by Sydney Morning Herald as a ‘tour de force’ comedy cabaret and is ‘guaranteed to get you laughing, thinking and shimmying in your seats.’

Reuben Kaye: The Butch is Back
Merlyn: 31 March – 24 April
After a whirlwind Australian tour in 2021, escaping lockdowns one by one, Reuben Kaye is coming back for Melbourne Comedy Festival. With a bigger band and brighter lights this star is rising, and taking the comedy and cabaret world by storm. With acid wit and casual sensationalism, Kaye is fast, on the edge and brutally funny.