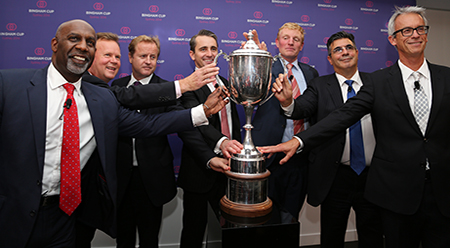 Leaders of Australia’s sporting codes have come together in Sydney to sign an unprecedented commitment to eliminate discrimination against gay, lesbian and bisexual players, coaches, administrators and fans in their sport.

This is the first time in the world that all the major professional sports in a country have collectively committed to implement policies and changes to make their sports welcoming to GLB people.

They have agreed to implement policies and changes consistent with a newly created Anti-Homophobia and Inclusion Framework, by the end of August, 2014 – when thousands of international gay rugby players, fans and media arrive in Australia for The Bingham Cup.

“I’m proud to see Australian sports play such an important leadership role through making this commitment to diversity and inclusion,” said Australia’s Minister for Sport, Peter Dutton. “There is no place for discrimination on our sporting fields, in our clubs or sports organisations.”

A feature of the event, was the launch of 30-Second anti-homophobia Community Service Announcement, You Can Play! (see below), produced for Play by the Rules – an organisation that helps prevent discrimination and harassment in sport.

Andrew Purchas, President of Bingham Cup Sydney 2014 and Founder of the Sydney Convicts Rugby Club, said “Many gay, lesbian and bisexual people still stay in the closet, or drop out of sport altogether, because of homophobic attitudes and discrimination in sport.”

“We have very few gay professional sportspeople who have felt safe to be open about their sexuality while competing and ultimately be role models to others. With these initiatives, we hope to see significant changes to sporting culture.”

“The major professional sporting codes are committed to do more than ban homophobic sledges. They have committed to create encouraging and welcoming sporting environments for gay, lesbian and bisexual people, whether they participate as players, officials or supporters.”

“I feel we have reached a turning point in our efforts to change sporting culture so that sexuality is no longer an issue,” said Mr Eales.

“It’s important to focus entirely on a person’s ability to play a sport and not get caught-up in old fashioned, clearly incorrect stereotypes and assumptions about people. I’m very proud of the five Australian sporting organisations for undertaking this commitment to make their sport more welcoming, safe and inclusive,” said Eales.

In closing, Andrew Purchas hopes this commitment by Australia’s major professional sports will set a global precedent: “Discrimination in sport is something we see globally, in fact, sport is one of the last places in western societies where gay, lesbian and bisexual people still struggle to be accepted.”

“We challenge sporting organisations around the world to adopt similar policies and make sport welcoming and safe for everyone.”

The 2014 Bingham Cup will be held in Sydney from 24 – 31 August. For more information, visit: www.binghamcup.com for details.