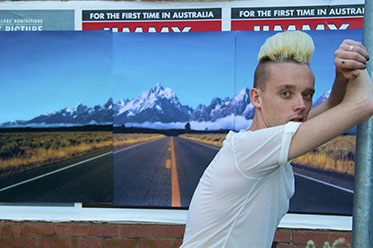 Drawing on inspiration from the movie My Own Private Idaho, Metamorphis Theatre Company has turned to the cult movie for their latest performance, IDAHO.

IDAHO isn’t an adaption of the film; instead it looks to celebrity and its cult status as a story of two hustlers who embark on a journey of self discovery, debates about sexuality, identity and society as signposts to explore. Hollywood harvests life through plots and narratives.

“But are our feelings the same as Hollywood feelings?” asks writer Kevin McGreal. “The creative process is about recycling, translating, interpreting materials and language which already exist in our own practice.”

Engaging the film and its soundtrack, IDAHO then translates and rewrites it, rendering alternative landscapes where we can project ourselves, identify and recognize our own subjectivity. Part dance and text, it looks at Warhol’s idea of mass culture and the power of image as a commodity by approaching Hollywood.

“We translate and edit the codes and Hollywood icon River Phoenix and the language of the entertainment industry. We want to expose the machinery and tease out the values of the mainstream media industry,” says McGreal.

“We wanted to do something that film doesn’t do – look at the star status of River Phoenix as a portrait to suggest the star’s is a reflection of our own understanding of projection of that character. What we think we see in the celebrity persona is a result of mass mediation, and above all of our own act of projection.”

Performed by Jessi Lewis, IDAHO utilises songs from the soundtrack to look at a relationship based on consumerism, while asking: do we consume pop or allow ourselves to be consumed by pop?

“IDAHO allows me as performer, an opportunity to reinvent songs as a soundtrack to my life in whatever way I choose,” says Lewis.

“We define ourselves by the music that we listen to, by the songs that we first heard at key moments in our past lives. It offers self reinvention. We are invited to shape our selves in moulds which have already been poured.”

McGreal and Lewis chose My own Private Idaho because the entertainment industry can be oppressive, citing we are vulnerable to film because it claims it knows who we are and what we need. Its appeals with the promise to address what we lack, assuming audiences are more literate than what is generally sold to them.

“Our own life experiences cannot be influenced by the culture industry. When we buy a movie ticket, we should have the right to translate and appropriate them,” says McGreal.

“When you take on a project like IDAHO there is a danger of the work getting a bit too heavy. Experience has made me rich so now the goal is to have fun at the same time.”