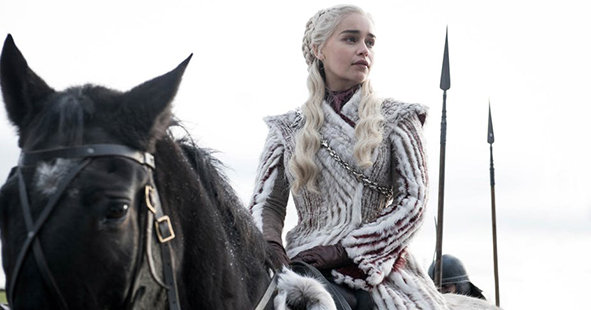 Game of Thrones is back. The most-watched show from HBO in nearly half a century is in its home straight after seven years – and the last six episodes will be among the most expensive television ever made. Given the way the world of television is rapidly splintering into audiences self-scheduling their viewing across different platforms, the show’s final episode could be the last global TV mega-event. Watch it or not, you will have heard of it. And it matters.

It matters in terms of representation. This show will be screened in countries where homosexuality is illegal, where women’s sexual choices are controlled and where trans identities are violently subjugated. How GoT reflects sexuality and what lessons are implied is culturally important. As the show moves towards its conclusion, it’s time to ask whether, given that cultural importance, the show has missed an opportunity with its queer storylines.

The story’s creator, George R.R. Martin, acknowledges his general debt to European history for inspiring plots and characters. At a recent fan convention, Martin identified some specific queer icons of the past, citing Alexander the Great, Richard the Lionheart, and Edward II and saying:

Knights and lovers
The first big gay relationship is between Renly Baratheon and Loras Tyrell. Renly is the younger of two brothers of King Robert Baratheon, who sits on the Iron Throne of Westeros as the series opens. After the king’s death, it is Renly’s champion knight Loras – also his lover – who first puts the idea of claiming the throne into Renly’s head.

One of the biggest threads of online debate about the show is the way the television series deviates from the books. Loras’s characterisation is hotly contested. In the books, his sexuality is more ambivalent, his adoration of Renly more ambiguous. HBO has outed the couple, given them sex scenes and created a fully-formed relationship.

But they have also made Loras more effeminate, interested only in fine clothing and fripperies. He beds almost any man who crosses his path. There’s nothing wrong in that in itself, but take away the plots that revolve around Loras’s sexuality in the TV show, and the character disappears.

A matter of tastes
There is also plenty of lesbian lust blooming in GoT. Daenerys Targaryen, mother of dragons, is headed throughout the show’s long narrative to Westeros to claim back the Iron Throne that was stolen from her murderous and insane father. But, before any of that begins we see her as as a nervous virgin being instructed in how to please her man by acting out positions and intimate touches with another woman. Bi-curiosity pops out of the screen.

It’s a bi-curiosity that Daenerys shows again five seasons later with the show’s fully-fledged Sapphic lover Yara Greyjoy – a potential ally with a much-needed navy – in a brilliant scene where flirtation and political consummation mingle inextricably.

Yara is such an attractive seductress that Ellaria Sands, another potential ally of Daenerys, also comes to find her hand between Yara’s legs at one point in the political assignations, while she purrs that she’s “developing a taste for it”.

Bisexuality is embodied not just by Ellaria Sands, but also by her male lover Oberyn Martell. When Oberyn is shown a line-up of women in a brothel, he admires each woman’s beauty and character before turning to the young man who is pimping them and demanding to sleep with him. Such a beautiful man as Oberyn is not met with any form of disgusted denial. The pimp/host Olyvar simply replies that he’s “wildly expensive”. Perhaps “gay for pay” exists in Westeros too?

All the worlds in GoT contain a basic gender binary. There are women who defy the gender expectations that others attempt to force upon them. Cersei Lannister, Robert Baratheon’s widow, casts off her husband’s name and claims the throne for herself.

Daenerys Targaryen co-operates with her brother’s brutal murder to blossom into a leader of global proportions and Brienne of Tarth is perhaps this world’s only honourable knight. But there are no prominent characters who move between genders and no societies in which gender has broken down or moved beyond a binary opposition.

Dangerous liaisons
The show’s famous maxim: “When you play the Game of Thrones, you win or you die”, leads inevitably to a lot of deaths. Part of what makes the show so gripping is that any character, even the central protagonist, can be killed. And these are homophobic times. In most of Westeros, open same-sex desire is impossible.

Vitto Russo, the gay film critic, noted a trend in some film representation where the gay man is presented only to meet an unhappy, punishing and often fatal ending. Lesbian characters meet similar fates, or are raped into compliance. US academic John Clum observed the same trend on stage and referred to it as “ritualistic purgation”. A queer character is presented simply to be destroyed, thus reassuring and reaffirming heterosexual orthodoxy.

A lot of heterosexual characters die in GoT. But in world where Brunei has just joined the list of pariah nations that have the death penalty for male homosexuality, a queer character’s murder might reasonably be argued to carry more contemporary weight and resonance. And the list of gay men that the show has killed weighs heavy.

Read more: Game of Thrones and the fluid world of medieval gender

In GoT, we are still waiting for a love that endures, for a fully-formed same-sex relationship that offers more than a prelude to death, for a queer character who enjoys promiscuity and gets away with it, for more expressions of gender fluidity. As we enter the final season it looks like the central heterosexual characters will grab the focus. We can still hope to see some queer characters move centre screen. And, if they do, we want them to live up to the motto of House Crakehall: “None so fierce.”

Image: Emilia Clarke as Daenerys Targaryen in season 8 of Game of Thrones – courtesy of HBO