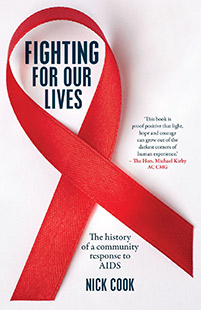 The inspiring and courageous story of how affected communities in NSW came together in the early 1980s to respond to the AIDS crisis has been detailed in a new book, Fighting For Our Lives.

Published by NewSouth Books in partnership with ACON – NSW’s leading HIV and sexuality and gender diverse health organisation – Fighting For Our Lives details how communities in NSW directly affected by the AIDS crisis bravely took action.

During the darkest years of the epidemic, marginalised communities – mostly gay men, sex workers and people who inject drugs – came together to form organisations that gave them a voice in the corridors of power.

They built an unprecedented alliance with politicians and medical experts, a three-way partnership that made Australia’s response to AIDS one of the most successful in the world.

Written by author and journalist Nick Cook, Fighting For Our Lives captures the events of this extraordinary period, and the stories of the people at the very centre of a life-or-death struggle.

“Fighting For Our Lives tells a huge part of the HIV/AIDS story that has often been overlooked, that the affected communities in Australia played a leading role in battling the virus,” said Cook. “The level of cooperation between affected communities, medical authorities and the political establishment was extraordinary, making the Australian response one of the best in the world.”

According to Cook, it is difficult today to fully appreciate the courage of those brave warriors who took a stand for their communities. “In 1980s Australia, gay men, sex workers and people who inject drugs were highly stigmatised. They did not trust the authorities – for very good reasons – and they often received little sympathy from society. They had to take the struggle into their own hands and in the process they created an entirely new model of public health,” he said.

The project had a deep impact on Cook, who was a child in regional NSW when the worst of the crisis unfolded and was mostly unaware of it. “I was stunned by the extent of the devastation visited upon the affected communities, not to mention the hatred and discrimination that accompanied it,” said Cook.

“People in my generation and younger simply have no concept of what occurred. The people who lived through those times, particularly those on the frontline of the battle, deserve our eternal admiration and gratitude. This is a story that must never, ever be forgotten.”

Fighting For Our Lives has been released to commemorate the 35th anniversary of ACON. Established in 1985 as the AIDS Council of NSW – ACON was one of the many community organisations formed in NSW to respond to the epidemic.

Don Baxter served in ACON’s first Governing Committee before being elected its president in 1987. He later took on the role of Chief Executive from 1990 to 1996 – the most devastating years of the epidemic. It was during Baxter’s tenure that life-saving HIV treatment finally became a reality. His insights are among the many that are featured in Fighting For Our Lives.

“Those early years were an uncertain, harrowing time for our communities,” said Baxter. “When ACON was formed, it was during a period of hysteria, fear, grief, sadness and trauma – many people, mostly healthy young men, were getting sick and dying. But we rallied together and, in time, we were able to deliver vital HIV prevention, treatment, support and care programs and services, which helped save countless lives.”

ACON CEO Nicolas Parkhill said ACON’s story is very much the story of our communities – one that is characterised by resilience, tenacity, strength, courage, compassion and hope. “In charting the early years of ACON, Fighting For Our Lives also examines the broad community movement that gathered in NSW in response to HIV/AIDS, which is often now referred to internationally as a global best practice response to HIV,” he said.

“By telling this story, we hope to ensure younger generations within our communities, people in mainstream society, as well as future policy makers are aware of the dramatic struggle that took place here in NSW throughout the 1980s and 1990s. As we enter our 35th year, ACON is a strong, resilient and important organisation to many. We form an incredibly valuable piece of ‘architecture’ in the state and national health landscape,” said Parkhill.

“We have provided help and assistance, care and compassion, and kindness and hope to many in our communities. We have shaped local, national and global health policy and practices. Our story is an important one and we are delighted it is being preserved in this way.”

This book is proof positive that light, hope and courage can grow out of the darkest corners of human experience. Nick Cook chronicles the terrifying early years of the HIV epidemic, identifying heroes and villains. And the story continues to this day to call forth our “better angels”. – The Hon. Michael Kirby AC CMG, Past Justice of the High Court of Australia and Patron of the Kirby Institute

Fighting For Our Lives is published by NewSouth Books and available at all good bookstores including Booktopia.

Image: Fighting For Our Lives (supplied)