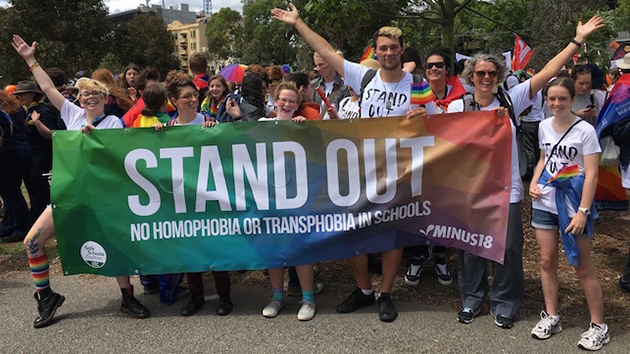 Arguments around sexual diversity dominated the final week of the last parliamentary session before the budget, with bitter divisions over same-sex marriage and the Safe Schools Coalition.

Homosexuality – and transgender – has become a proxy for two equally bitter contests. One is Labor’s determination to prevent the Greens’ rise as a significant third force in Australian politics. The other is for the soul of the Liberal Party, a larger conflict than that between Prime Minister Malcolm Turnbull and the bitter camp of Abbott exiles.

Everyone but the religious Right, I suspect, is sick of the same-sex marriage debate. Public opinion polls have made clear that most Australians believe the law should be changed to allow same-sex couples to marry. Even some conservative politicians have said they think a plebiscite is a waste of time and money.

Yet the debate continues. Every political faction is determined to wring whatever mileage they can from the issue. The Right won one victory this week: Senate manoeuvres resulted the same-sex marriage bill being put on a back-burner for the time being.

This further inflamed bitterness between Labor and the Greens. Each is crying foul over procedural manoeuvres designed to suggest they oppose same-sex marriage, when the real battle is for numbers in the Senate.

Nothing other than internal government politics prevents parliament amending the Marriage Act to allow for same-sex marriage. The resignation of Labor senator Joe Bullock was a dramatic acknowledgement that a Labor government would do exactly that.

Every political party has champions of same-sex marriage vying to win credit for this change. Within the Liberal Party same-sex marriage has become a proxy for a battle between social conservatives and progressives, the former including most of Tony Abbott’s diehard supporters.

A plebiscite is a bad idea for a number of reasons. Not only is it wasteful, unnecessary and divisive, but a plebiscite on same-sex marriage will hold back the referendum on Indigenous recognition that is required for constitutional change.

Now that several government MPs have indicated they would not feel bound by the results of a plebiscite, Turnbull has the opportunity to ask the partyroom to revisit the decision and support a free vote. He might gently remind them that abrogating their obligation to legislate is an extraordinary breach of the Westminster tradition on which liberals so pride themselves.

Inevitably the marriage debate has become entangled with another push from conservative parliamentarians – the Safe Schools program, which is aimed at teaching children about sexual and gender diversity.

The conservatives asked for a review of the program. Having had one that appeared as though it wouldn’t satisfy them, they redoubled their attacks in the hope of having the program scrapped. LNP MP George Christensen, a key agitator, said he was “surprised” that the government’s response to the review went as far as it did; the changes would “gut the program of all of the concerning content”.

Perhaps the most serious change is the requirement for parental consent, which means those kids questioning their sexuality or gender identity who come from unsupportive families are likely to miss out on the very program that might help them deal with their anxieties.

The hyperbole around these attacks, led by Christensen (who has a history of inflaming public debate and has been accused of racist and sexist behaviour), stems from a mixture of political opportunism and deep fears around changing sexual and gender norms.

The opportunism is obvious. Fearmongering, whether against queers or Muslims, is a preferred tactic of the Liberal rump, which increasingly resembles the exiled Stuarts dreaming of a return to the throne. A couple of incautious comments by people connected with Safe Schools gave them ammunition enough to create doubt among many of their colleagues.

The current polarisation around queer issues echoes the international debates, where it becomes impossible to engage in discussion without resort to name-calling. Thus former human rights commissioner Tim Wilson, who on Saturday won Liberal pre-selection for the seat of Goldstein, was attacked viciously for defending Safe Schools in a leaflet that clearly distorted his views.

The weekend papers were also a good indication of how viciously this campaign is being fought. The Weekend Australian ran a front page attack on the research underlying the program, in which it quoted as its major authority James Athanasou, an associate professor in rehabilitation counselling.

The Australian’s report points to differences between figures for same-sex attraction in various studies, but fails to distinguish between attraction and identity, a basic argument in the 2013 Australian Study of Health and Relationships which the reporter accepts as definitive.

Politicians and the media are both responsible for the debate’s polarisation. The Murdoch press has delighted in exaggerated and sensational reports about the program. Even the ABC’s Q&A program has given considerable airtime to the most extreme opponents of same-sex marriage, rather than seeking out people who have genuine concerns but are equally conscious of homophobic and transphobic abuse.

Many in the queer community fear a plebiscite will unleash the sort of vituperation and threats that have been apparent in the reaction to the Safe Schools controversy. Turnbull called on all MPs to be measured and:

… to consider very carefully the impact of the words they use on young people and on their families.

Unless he holds his own supporters to account there is little chance of a sensible debate on any of these issues.