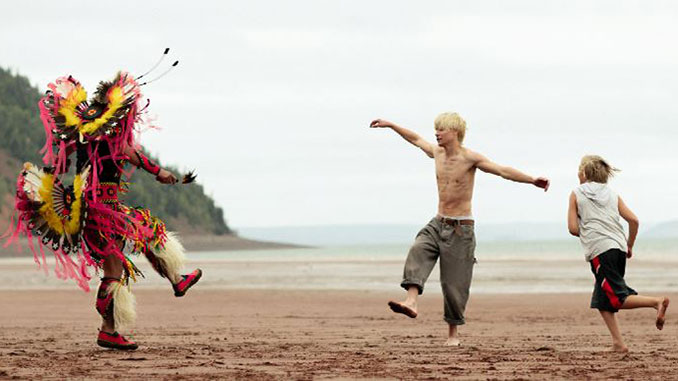 Queer Screen’s 29th Mardi Gras Film Festival invites audiences on a mission to the Queer Frontier, to meet emerging and established filmmakers and explore new stories, styles and genres together – online, in the cinema, or both!

Running from 17 February to 3 March, the Festival includes screenings at Event Cinemas in George Street and special ‘one night only’ sessions at the Hayden Orpheum, Cremorne and Event Cinemas in Parramatta and Hurstville. The Festival will then tour to the Blue Mountains on 11 – 13 March and Canberra on 18 – 21 March 2022

Those who prefer not to attend physical events can stream from the comfort and safety of their own home. “We understand there is on-going uncertainty in the community regarding the Omicron outbreak in Sydney and are delivering a hybrid festival to ensure the program is as accessible as possible and adheres to our COVID-19 safety plan,” said Festival Director, Lisa Rose.

“This means LGBTIQ+ communities in Sydney can choose to attend in the cinema or online, and regional and interstate friends of the Festival can join our expedition to the Queer Frontier from wherever they are in Australia. More than half of the Festival’s world-class program is available to stream, On Demand.”

The Festival remains a stalwart for the best and freshest LGBTIQ+ storytelling from around the world, delivering 119 films in total, including 32 narrative features, 15 documentaries, 4 episodics, a retrospective and 9 programs of shorts – from 37 different countries.

Rose says the Queer Frontier is where LGBTIQ+ communities are keeping the good fight going. This year we pay particular attention to the inspiring First Nations individuals and activists from around the world whose fight to carve out space for themselves helped us all.

“The Festival’s two program strands, Focus on First Nations and Rebels With a Cause, honour stories of queer strength and resilience, be they factual or fictional. They shine a light on people with the resolve to survive and thrive in all possible circumstances,” said Rose.

FOCUS ON FIRST NATIONS:
The opening night film, WILDHOOD, is a captivating story set in Canada’s Atlantic Provinces. When two-spirit youth, Link, runs away from his abusive white father in search of his mother, he meets Pasmay, a pow wow dancer, and together they journey towards community, identity, and love.

FINLANDIA is a magical realist drama set in rural Mexico, where a group of muxes – the indigenous Zapotec peoples “third gender” – band together to create exquisite traditional dresses while they heal from their individual battles.

Rounding off the Focus on First Nations, we return to Canada for our episodic centrepiece, QUERENCIA, about two Indigenous queer women who find one another and connect in a big city. It’s a romantic coming-of-age, the likes of which we rarely see on screen.

REBELS WITH A CAUSE:
Rebels With a Cause kicks off with a powerful documentary, DENISE HO: BECOMING THE SONG, about the Canadian-born, Hong Kong-based pop singer and pro-democracy human rights activist who was arrested in late December 2021 for sedition.

SEYRAN ATEŞ: SEX, REVOLUTION AND ISLAM documents a female imam’s fight for the modernisation of Islam from her mosque in Berlin, where there is no gender segregation.

The unrelenting and unapologetic Australian-born activist, Peter Tatchell, who has achieved and endured so much, is expertly profiled in HATING PETER TATCHELL. Just as definitive is KEITH HARING: STREET ART BOY, featuring previously unheard interviews with the artist, his friends and collaborators.

NO STRAIGHT LINES: THE RISE OF QUEER COMICS charts the hitherto hidden history of LGBTIQ+ creators (including Alison Bechdel) whose work was revolutionary in an industry dominated by white, straight, cisgender men.

CLOSING NIGHT:
Cinematic celebrations of African-American gay men such as the one depicted in closing night film, B-BOY BLUES, are also rare. An adaptation of the 1994 novel by James Earl Hardy, about a journalist who falls for a courier, this one is enchanting from start to finish.

LOCAL COLOUR:
ROMP – a hilarious episodic about three housemates looking for love, is having its World Premiere at the Festival. It was shot in Newtown, with guest appearances by Gretel Killeen and Matthew Mitcham.

Oxford Street’s Naked Barber appears in MANSCAPING – a documentary about the queering up of the traditional barbershop experience. It is one of 51 Australian Premieres. We are also screening 18 Australian short films.

A number of filmmakers will be on hand to introduce their work throughout the Festival. The recipients of the eighth Queer Screen Completion Fund will also be announced. ROMP was a beneficiary in 2019.

MA BELLE, MY BEAUTY (Sundance Film Festival, Next Audience Award, 2021) – a polyamorous relationship rekindles when its three members reunite in the South of France.

YOU’LL BE TALKING ABOUT:
Sexy and sex positive: BLISS (GLÜCK) is an insight into the lives of sex workers in Berlin and, at its heart, a love story. In BOY CULTURE, an episodic follow-up to the 2006 film of the same name, the lead’s return to hustling is boosted when he gets schooled in social media.

Obsessive and compulsive: THE NOVICE is a gripping ride with a queer student who takes up rowing to fit in and is consumed by becoming the best. THE PERFECT DAVID is a chilling tale of an obsessive teenage bodybuilder.

Hollywood, old and new: BOULEVARD! A HOLLYWOOD STORY is a slick Jeffrey Schwarz (TAB HUNTER CONFIDENTIAL, QSFF15) documentary recalling the time when Gloria Swanson recruited two young songwriters to shack up in a Hollywood mansion and write a musical version of SUNSET BOULEVARD.

THE SIXTH REEL is a classic screwball comedy, with an all-star cast including Margaret Cho, Julie Halston and Tim Daly, while JUMP, DARLING is late screen legend Cloris Leachman’s final film role. She plays a grandmother whose grandson is a drag queen.

SPECIAL EVENTS and COMMUNITY SCREENINGS:
BOUND was the Festival’s opening night film 25 years ago. We pay tribute with a special screening and invite everyone to come dressed as a leather-clad butch or sultry femme fatale. There will be prizes for the best outfits. Arrive early for REBEL DYKES.

MY QUEER CAREER is Australia’s richest queer short film prize and eight magnificent entrants – including animations, coming-of-age tales, comedy, documentaries and more – are in the running for over $16,000 worth of cash and support.

Five community screenings with $10 tickets are being held around Sydney, including THE FIRST GIRL I LOVED in Hurstville, KAPANA and IFE, two African films in Parramatta, and HETERO, followed by a panel discussion featuring young fimmakers, in the city.