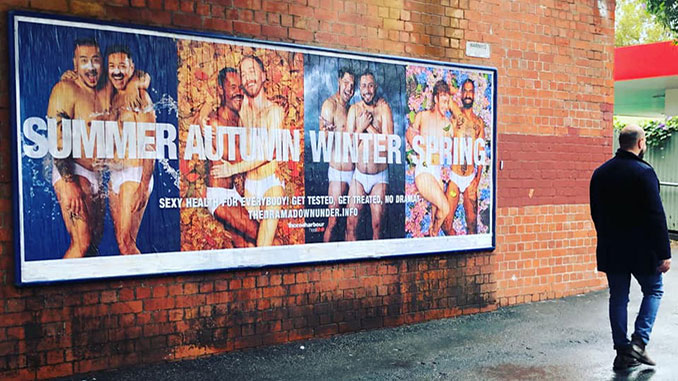 Thorne Harbour Health’s long-running Drama Downunder health campaign has hit the streets with a focus on quarterly sexual health testing and featuring a diverse range of models from the local community.

First launched in 2008, the Drama Downunder has been reminding gay men and other men who have sex with men to look after their sexual health and wellbeing for over a decade. While the campaign has continued to reinvent itself from year-to-year, last year saw a signficant change when the campaign introduced seven new faces from the community.

“The Drama Downunder has been our flagship health promotion campaign for thirteen years and the inclusion a diverse range of faces and body types has been incredibly well received,” said Thorne Harbour Health Acting CEO Carolyn Gillespie.

“Now with an amazing line up of models from our communities, we’re revisiting one of our more popular campaigns to remind folks that with every new season it’s time to get a sexual health test.”

Focused on encouraging quarterly sexual health screening, the original ‘seasons’ iteration of the campaign was released in Victoria in 2015. The campaign went on to run in South Australia before being adapted for the Northern Territory AIDS and Hepatitis Council and feature Aboriginal rugby league footballer Casey Conway.

The latest Drama Downunder campaign revisits the four seasons with a different pair of models featured in summer, autumn, winter, and spring.

“As COVID restrictions around gatherings have eased, our communities are adapting to a new normal,” said Carolyn Gillespie. “We want to ensure this includes continuing to look after their sexual health and wellbeing.”

The latest campaign is running now through June 2021. For more information, visit: www.thedramadownunder.info for details.